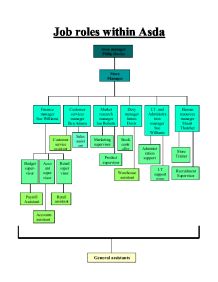 Then once everyone has been given an interview some people will be turned away leaving 10 people left which will be given a second interview and after that interview one of them will be given the job. She can only set out to employ somebody once she has been told to by Stuart Thatcher the Human resources manager. To become the recruitment supervisor she needed these qualifications: * 4 A*-C grades at G.C.S.E * 2 A-levels * Some experience in Human resources As a benefit of being the Recruitment supervisor she gets a discount on anything she buys at Asda. The Recruitment supervisor has to work 44 hours per week and she gets paid �16,000 per year. Assistants or support staff These are people who support the internal working of the organisation and who perform support tasks for managers. The main duties of the support staff are: * To carry out the duties as specified on the job description and as required by the manager or supervisor. * To obey reasonable instructions * To co-operate with other team members. One example of an assistant is the Warehouse Assistant and his job is very clear, his job is to retrieve the stock from the suppliers and then take the stock to the warehouse and put it in order for it to go up on the shelves which the warehouse assistant and his team members will do. The Warehouse Assistant has to work. The warehouse Assistant has to work 54 hours per week like most assistants and he gets paid �7 per hour and he often has to work overtime for which he gets paid �4 more per hour like most assistants. ...read more.