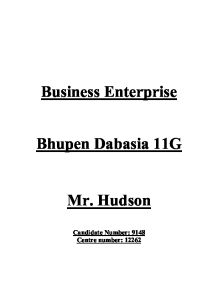 Business Enterprise Bhupen Dabasia 11G Mr. Hudson Candidate Number: 9148 Centre number: 12262 Terms of Reference: For this business studies report, me and three other colleges took part in running a small little enterprise for one day in the Christmas Fayre. In our team we had Suraj Unalkat, Shing long-man, Jay Joshi and my self Bhupen Dabasia. Together we chose the following stall ideas and will chose the best one which we could run. Also we all promised to ensure efficient organization and provide a high quality of service when the enterprise makes its debut appearance. Also to be a successful business we will have to make profit and we will have to contribute it all to the school, as it providing money to let an area were we would be based to set up our enterprise, also they are not charging us for any variable costs i.e. Lighting, Heating. There is a deed of partnership which you can see in the appendix (fig 1). Enterprise Options: Below I will list a few ideas as a group we came up with to base our enterprise on; also I will include the pros and cons of that particular enterprise: ==> Cake Stall: Pros: Firstly it is easy to serve cakes to customers, hardly any difficult procedeours. Also you can buy in bulk and sell off the items for more so revenue is also going to be higher. With the preliminary tests, at break or lunch, we could increase the profit and attract more potential customers. Cons The main issue here is litter, this will have to be resolved some how and not abused. We would also require an organized queuing system, which would be available on the day. One major factor is that on the day people may not want to eat cakes, as they are not fast food but more of casual foods were you gossip in caf� drinking coffee and having a slice of cake. ...read more.

Questions 1 and 2 were not really needed they just drew in the reader more. Question 3 although basic did help us a lot It proved that quite a lot of people would be attending the Christmas Fayre and the fact that most of those going were male this made it a lot easier for us to get a higher revenue. Question 4 asks he reader what they would do at the fayre; the most common response we received was that they would just take a look around. And remarkably from question 5 the majority of the people interested in coming to the Christmas fayre said that they would spend at least 2-3 hours at the fayre. This seems odd because they said in question 4 they just went to look around, his proves that they were dawn in and they actually spent time and money at the fayre not just wasting time. In question 6 we asked if they would enjoy shooting guns? From the feed back we got I can say that even girls put down they would like to shoot, this was very weird because we never suspected females to be interested in violence, this meant our market would widen as girls would influence other girls to shoot the target. The 7th question asked the reader if they would go to the Gym to visit the shooting gallery. This data was collected by three possible answers, it proved that people were willing to come but they were more not interested or Not willing. Question 8, was not recommended to be sent out but because we had caused so much confusion we opted to ask the students which prizes they would like to claim. Finally the last question about how much they were willing to pay for 3 shots. This was only set out to find out how much the people were willing to let out on 3 shots at a chance of shooting. ...read more.

We photocopied a lot of targets so we didn't run out whilst maintaining the stall. We also kept a 12-meter safety line, which wasn't to be passed by unauthorised people. We had identification tags to promote the stall and to see who was given the rights to pass the safety line/table. Also with this all spectators we kept at 20 meters back. We tested it and found even the ricochet of the 6mm plastic pellets wouldn't reach a passer by. With the safety issue every one close to the shooting range had to wear goggle and it was at there own liability if they didn't wasn't to wear them, but we did ensure them constantly. Recommendations: Improvements, which we could have made, were to make more shooting ranges, not just the one, by this I mean to have 2 or 3 so that more people could use the facilities and not be deterred by the queues. Also I feel we should have had a larger working force so we could have had breaks and nourishments to replenish our selves. Also I think that the resources we had could have been better, such as the backboard for the targets, as we used two crash mats we could have acquired cork board which would have absorbed the bb impact and also kept them inside the wood so we didn't have to pick up the bb at the end of the day instead we could have just taken the boards and picked them out. I think the activity chosen was excellent as it had never in the schools history been practiced we made the first time the one to remember. I feel that we made it look very professional and also got high revenue from creating our exceptional stall. I would defiantly do it again with even higher potential, if I had more time I would have developed it, not drastically, but enough to gain a higher turn over. And it wouldn't be the same if I hadn't had done it with such enthusiastic and very hard working people. ...read more.