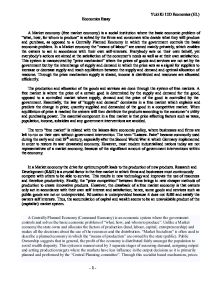 Economics Essay A Market economy (free market economy) is a social institution where the basic economic problem of "what, how, for whom to produce" is solved by the firms and consumers who decide what they will produce and purchase, as opposed to a Centrally Planned Economy in which the government controls the basic economic problem. In a Market economy the "means of labour" are owned mainly privately, which enables the owners to act in accordance with their own self-interests. Everybody acts on their own behalf, yet everybody's actions are aimed at the satisfaction of the consumer's needs as well as at their own satisfaction. This system is manoeuvred by "price mechanism" where the prices of goods and services are not set by the government but by the interchange of supply and demand in which the price acts as a signal for suppliers to increase or decrease supply and reach equilibrium between the supply and demand and optimal allocation of resource. Through the price mechanism supply is shared, income is distributed and resources are allocated efficiently. The production and allocation of the goods and services are done through the system of free markets. A free market is where the price of a certain good is determined by the supply and demand for the good, opposed to a controlled market where supply, demand and the price of the good is controlled by the government. ...read more.

In addition, productions of goods and services are mostly inefficient and shortage of production is a common problem where in many cases factories are not provided with sufficient resources from the government to produce the goods and services. Taken as whole a Planned Economy can continuously fully utilize its available resources to produce goods and services, hence, it does not suffer from the "business cycle". Moreover, employment and production remain at effective levels which develop in a constant manner without the influence of supply, demand, or inflation as the resources are owned and allocated by the state. The system serves the benefit of the whole nation rather than individual ends by producing public and merit goods and services, which as a result aims to eliminate wealth disparity amongst the population as well as the creation of individual profit motives. However, the drawbacks of the planned economy are that government demands do not satisfy consumer demands and the lack of personal incentive and motivation to reach beyond the target production makes the economy a conservative market without innovative ideas and methods of production. When a country makes a successful transition from a Centrally Planned Economy into a Free Market economy it goes through four fundamental processes of Liberalization, Stabilization, Privatization, and Legal reform which is also known as the "Big Bang approach" during China's transition from a planned economy into a market economy in the late 20th century. ...read more.

However, inflation rates are eventually controlled and stabilized in the following years. Furthermore, through the process of "Legal reform" there will be less government interventions and as a result there will be a change in production from capital goods to consumer goods. This will only benefit the individual owners who aim to achieve maximum profit, rather than the incentive of economic growth. Additionally, there will be a decrease in subsidies provided by the government and a fall in tax collection as well as under supply of public and merit goods. Thus, the majority of the production of goods and services will be targeted to individuals who can afford them. Through privatization, the country will then be open to trade which can shift the country's production possibility frontier to the right, which will generate economic growth. During the planned economic system, trade was limited or not offered by the country while the move to a market economy suggests investment from country's abroad. However, this was problem in Russia because of the inexperience of the people to specialize on a good and trade with other countries. Moreover, it was difficult for countries to trade effectively with other countries because of the worry of the stability of the country's economy. In Conclusion, as a country undergoes a transition in its economy there are many benefits and consequences which it must endure. However, the drawbacks occur during the transition of the economy, yet after the transition the country will be able to grow rapidly as China did after its transition from a planned economy to a free market economy. ...read more.