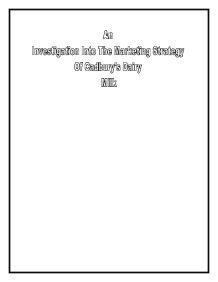 Aim: To evaluate the marketing strategy of Cadbury's Dairy Milk and make any recommendations as to any improvements. Objectives: To conduct primary and secondary research to identify the marketing strategy of CDM. Use appropriate theories/concepts to suggest and justify any potential improvements. Background A young Quaker, John Cadbury opened a business in Bull Street, Birmingham in 1824. This company was to be the foundation of Cadbury Limited which is now the world's largest chocolate producers. John Cadbury had become a maker of drinking chocolate and cocoa in 1831. It was at this time that the business changed from a grocery shop to the start of the Cadbury manufacturing business that is well known today. In 1861 John Cadbury's two sons Richard and George took over the family business. By the time it was 1879 the two brothers Richard and George had built their own factory in Bournville. Cadbury Trebor Bassett have 32% market share of the UK confectionary market. This UK confectionary market earns �5.6 billion per year. It consists of 156 different brands with Cadbury's main competition being Nestle 20%, Masterfoods 20%). Others include Thorntons, Lindt and Kraft. They manufacture in 15 different 15 sites and these sites have approximately 7000 members of staff. ...read more.

It is not too high but then again it is not too low either. Occasionally they offer promotions that could be seen as being penetration pricing 25p offer (49p) PLACE PROMOTION * Gondola ends in supermarkets * London Underground vending machines * Shops * Petrol Stations * Cinema Above the Line * Radio * TV * Posters/Magazines/Billboards * Newspapers Below the Line * In-store displays (2 for �1.80) * Dump Bins * Purple Patch * Podcasting * Roadshow with free samples * Website and email to consumer database (direct mail) * Loyalty card system with retailers for high sales. * 'Get Active' I will now be identifying the marketing mix implemented by Cadbury Dairy Milk. I will provide explanations of the grid for each of the four P's. Product Cadbury Dairy Milk packaging has changed over the years. From being a simple design from when it first started, it is now well recognized by many people. The product itself has developed. With Cadbury Dairy Milk being the mother brand, it now has a variety of different flavours. They have flavours such as Turkish Delight, Mint and Caramel. These flavours will suit the likes and dislikes of the customers that are buying the products and in the end it will satisfy all of their customers. ...read more.

In order to collect primary research I will be asking a variety of people questionnaires related to Cadbury Dairy Milk and their products. I used this method as a questionnaire gives a variety of answers to choose from and I will also get accurate results. I decided to create one questionnaire for the entire group as it is time consuming and it kept it more consistent. Each person in the group had a find three people to ask the questionnaire to. Together there would be around sixty sets of results. This adds to it being more time consuming as this would be quicker rather than each person asking sixty people themselves. I also decided to collate my results because a larger sample size means that the results would be more accurate. Data Analysis Limitations There are various problems that could have affected the results of my data. One of the problems that could have affected this was there was a small sample size. Because there was a small sample size the results wouldn't have been as reliable as it would be if there was a bigger sample across a wide range of places. Another problem that could also affect the result is where the questionnaire has been completed geographically. The questionnaires could have been completed in the same area. Bibliography & Appendix Quote the sources you've used. ...read more.