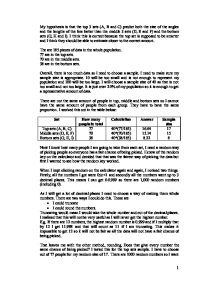 My hypothesis is that the top 3 sets (A, B and C) predict both the size of the angles and the lengths of the line better than the middle 3 sets

My hypothesis is that the top 3 sets (A, B and C) predict both the size of the angles and the lengths of the line better than the middle 3 sets (D, E and F) and the bottom sets (G, H and I). I think this is correct because the top set is supposed to be smarter and I think they should be able to estimate closer to the correct amount. The are 185 pieces of data in the whole population. 77 are in the top sets. 70 are in the middle sets. 38 are in the bottom sets. Overall, there is too much data so I need to choose a sample. I need to make sure my sample size is appropriate. 10 will be too small and is not enough to represent my population and 100 will be too large. I will choose a sample size of 40 as that is not too small and not too large. It is just over 20% of my population so it is enough to get a representative amount of data. There are not the same amount of people in top, middle and bottom sets so I cannot have the same amount of people from each group. They have to have the same proportion. I worked this out in the table below: Set How many people in total Calculation Answer Sample size Top sets (A, B, C) 77 40*(77/185) 16.64 17 Middle sets (D, E, F) 70 40*(70/185) 15.14 15 Bottom sets (G, H, I) 38 40*(38/185) 8.22 8 Now I know how many people I am going to take from each set, I need a random way of picking people so everyone has a fair chance of being picked. I knew of the random key on the calculator and decided that that was the fairest way of picking the data but first I wanted to see how the random key worked. ...read more.

However the top set got the mean most far-off as even the bottom groups mean was smaller than it. In the standard deviation however, the top set got the smallest so their data was less spread out. The bottom set has the highest standard deviation so its data was the most spread out and few people got the accurate length.. As the standard deviation is more accurate than the mean, top set still got good estimates. Scatter diagram I wanted to see if there was any correlation between peoples estimates on the angles and the lengths. To make this fair I took the x value of what I done in the standard deviation which showed either "Angle - Actual value (59)" or "Length - Actual Value (64)". I plotted the angle on the x axis and the length on the y axis. For the top set, there seems to be a very weak positive correlation between the lengths and angles. I have drawn a line of best fit but 7 out of the 17 pieces of data are very far away from the line of best fit. I drew another scatter diagram for the middle sets and bottom sets on the following page. There seems to be no correlation for these scatter diagrams as well. This shows that they estimates the pupils made about the length of the line and the size of the angle were not related. Conclusion For angles, my hypothesis was correct as top set had better mean, median, mode and range. It also had a better box plot and standard deviation. For the lengths of the line however, it was not as simple to see which set predicted the lengths better. Top set had the worst mean but the best standard deviation. Top set didn't get a good mode or median but it had the smallest range. From the box plots, it was impossible to see which set done better. So overall my hypothesis was right for the size of the angle but not for the length of the line. ?? ?? ?? ?? 1 ...read more.