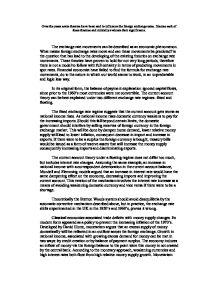 Over the years some theories have been said to influence the foreign exchange rates - Discuss each of these theories and critically evaluate their significance.

Over the years some theories have been said to influence the foreign exchange rates. Discuss each of these theories and critically evaluate their significance. The exchange rate movements can be described as an economic phenomenon. What makes foreign exchange rates move and can these movements be predicted? is the question that has lead to the developing of the existing theories on exchange rate movements. These theories have proven to hold for not very long periods, therefore there is not a model to follow with full certainty in terms of predicting movements in spot rates. Financial economist have failed to find the formula for exchange rate movements, do to the nature in which our world seems to work, in an unpredictable and logic less way. In its original form, the balance of payment explanation ignored capital flows, since prior to the 1960's most currencies were not convertible. The current account theory can be best explained under two different exchange rate regimes- fixed and floating. The fixed exchange rate regime suggests that the current account gets worse as national income rises. As national income rises domestic currency weakens to pay for the increasing imports. Should this fall beyond certain limits, the domestic government should interfere by selling reserves of foreign currency in the foreign exchange market. This will be done by dampen home demand, lower relative money supply will lead to lower inflation, consequent decrease in import and increase in exports. ...read more.

The portfolio balance theory, is an extension of the monetary model, and extends on the idea that exchange rates are determined by the relative supply and demand for money at home. Portfolio theory introduces the idea of foreign money and foreign bonds being potential substitutes for bonds and money at home. If foreign and domestic bonds are perfect substitutes and assuming interest rates hold, there is no difference between the portfolio theory and the monetarist approach. Nevertheless, the portfolio theory states that in the short run, this assumption cannot be made, because exchange rates are determined in part by the relative demand and supply of money and in part by other assets. Agents may hold international portfolios of assets denominated in different currencies, making demand for money a more complex function. This theory also involves changes in exchange rates impacting wealth holders of assets denominated in foreign currency. The portfolio theory shows a combination of interest rates and exchange rates for which the bong market is in equilibrium. In practice, if interest rates at home rise, investors will demand more domestic bonds, and the only way to reduce this excess demand is by the fall in the domestic currency value of foreign bonds. Thus, the home currency appreciates in value, reducing real wealth of the portfolio holders. Therefore, with a fixed supply of domestic bonds, equilibrium is maintained by the relation between the exchange rate and the domestic interest rate. ...read more.

semi-strong efficient markets assert security price move according to all public information, and strong form efficient market includes both public and private information therefore there is no monopolistic access to information. Western economies argue that there market reflects the semi-strong efficient model, although evidence is know challenging this argument. The theories covered above are relevant in explaining systematic patterns of exchange rate behaviour or long-run behaviours such purchasing power parity or the Fisher effect. The value of these theories for predicting exchange rates is limited basically for the propensity of the unexpected to happen. The real world is characterised by unpredictable unexpected events or "shocks" that are referred to as news. Interest rates, prices and incomes are affected by "news" and the same is true for exchange rates. Periods dominated by unexpected events will result in great fluctuations in spot and forward exchange rates. Since exchange rates are financial asset prices that respond quickly to new information, news on prices will have an immediate impact on exchange rates. Periods dominated by news, observe exchange rates varying a great deal relative to prices, such as periods as the 1970's the 1980's and he early 1990's, where many unexpected economic events occurred and consequently oil prices rose and debt problems appeared. In conclusion exchange rates will remain volatile, while world political events remain unpredictable and therefore no theory will be able to explain or predict exchange rate fluctuations with complete accuracy. ...read more.