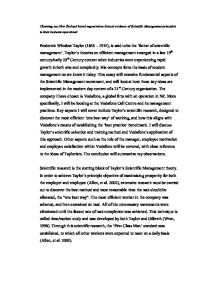 Choosing any New Zealand based organisation discuss evidence of Scientific Management principles in their business operations:

Frederick Winslow Taylor (1856 - 1915), is said to be the 'father of scientific management'. Taylor's theories on efficient management emerged in a late 19th century/early 20th Century context when industries were experiencing rapid growth in both size and complexity. His concepts form the basis of modern management as we know it today. This essay will examine fundamental aspects of the Scientific Management movement, and will look at how these key ideas are implemented in the modern day context of a 21st Century organisation. The company I have chosen is Vodafone, a global firm with an operation in NZ. More specifically, I will be looking at the Vodafone Call Centre and its management practices. Key aspects I will cover include Taylor's scientific research, designed to discover the most efficient 'one best way' of working, and how this aligns with Vodafone's means of establishing the 'best practice' benchmark. I will discuss Taylor's scientific selection and training method and Vodafone's application of this approach. Other aspects such as the role of the manager, employee motivation and employee satisfaction within Vodafone will be covered, with close reference to the ideas of Taylorism. The conclusion will summarize my observations.

Scientific research is the starting block of Taylor's Scientific Management theory. In order to achieve Taylor's principle objective of maximising prosperity for both the employer and employee (Allen, et al. 2002), extensive research must be carried out to discover the best method and most reasonable time the task should be allocated, the "one best way". The most efficient worker in the company was selected, and then examined on task. All of his unnecessary movements were eliminated until the fastest rate of task completion was achieved. This technique is called time/motion study and was developed by both Taylor and Gilbreth (Wren, 1998). Through this scientific research, the 'First Class Man' standard was established, to which all other workers were expected to meet on a daily basis (Allen, et al. 2003).

At Vodafone, similar research is conducted by management to establish "Best Practice". Information is sourced from Vodafone international and also from external companies with comparative roles. Hired consultants also provide research services to Vodafone's call centre. From this information, customer statistics are derived, call cycles planned, and "best practice" (the Customer Service Representative [CSR] benchmark) is established. For example, multiple phone calls are timed and listened in on, and conclusions are then drawn by management as to which approaches and methods are most effective for the CSR's to use, relevant to different customer needs and personalities. One conclusion that has been drawn from this scientific research is that the time allowance of phone calls should be on average 4 min 10 sec.

"Best practice" in the call centre is defined by four "Key Performance Indicators" (KPI's). 'First call resolution' means resolving a customer's issue in the first phone call, avoiding passing them around or having to call them back. The second KPI is 'Quality'. CSR's phone calls are randomly listened in on by the manager who assesses performance. 'Next Best Activity' refers to value adding. CSR's need to look up the customer's profile and sell to them depending on their cellphone habits (for example, whether the customer texts or makes calls). The last KPI is 'retention', where managers analyse how well a CSR managers to retain a disgruntled customer.

Taking into account Taylor's research, the next step was to scientifically select, train and develop the most suitable workers for the respective task, rather than leaving the employee to autonomously adapt to their role (Melman, 2001). According to Taylor, everyone had the potential to perform at the "first class" standard for some job. It is the task of management to identify the most suitable job for each individual, and train them in that position (Allen, et al. 2002). At Vodafone, there is an entire management team solely devoted to training CSR's for call centre work. Their role includes running a 6 week induction training period of employees, including teaching the technology, sales plans, how to deal with difficult customers, how to engage customers and so on. They are trained to meet the benchmark established through Taylor's research process. Part of the manager's role is also to up skill existing employees based on their performance reviews. A 5-point rating scheme is used to assess performance, with one being a poor performer and five being outstanding.

Taylor's Scientific Management method requires managers to work closely with workers, developing and encouraging, as well as to evaluate their potential within their role. The manager must maximise a worker's proficiency in their job, or failing this, must find the worker a better suited role within the company (Allen, et al. 2003). The manager's role involves instruction cards, rosters, timekeeping and reporting. Worker's productivity can then be analysed and compared, with high and low performers subsequently rewarded or punished (Melman, 2001). Vodafone call centre managers implement this method through daily, weekly and monthly reports. The 'Daily Dashboard' includes and snapshot of the previous day's KPI results, while weekly and monthly employee reports are more comprehensive, analysing performance, sick and annual leave figures, employee turnover and total quality results. If an employee is falling below 3 points in performance rating, the call centre manager will adopt Taylor's approach, identifying the problems and fixing them in a process called 'performance managing'. If the employee possesses good skills but is in the wrong job, 'secondments' are offered, meaning the employee can be placed in another role  for a fixed time to see how he/she operates in that role (for example, a telemarketer can work for three months in the faults service section).

The Taylorist approach involves a distinct separation between the organisational structure, routine-technical planning, inspections and all other clerical work, and the labour itself. There is an equal share of work and responsibility given to manager and the labourer. While managers strategise and plan, workers actually perform the tasks (Allen, et al. 2002). Vodafone adopts this principle, and have numerous management teams who deal to different aspects of the company while the CSR's work on the phones. For example, management teams for training, forecasting customer activity, for statistics and research, development and employee satisfaction.

Taylor's primary method of motivation was monetary incentives. He claims that Scientific Management cannot work unless there are benefits for the worker. Tasks should be arranged in such a way that if a worker produces more, he can get paid more (Gabor, 2000). Additionally, rewards must be issued without delay, so the worker receives instant gratification and can tangibly measure the personal benefits of his labour (Taylor, 1967). Vodafone works on a pay-by-performance scheme, and salaries are increased or decreased at an annual review, depending on the individual worker's quality performance record. Scholarships and international placements are among some of the rewards offered. However, in contrast to Taylor's theory, Vodafone believes job satisfaction and alignment with the company's values are also important factors in achieving hard-working employees.

Taylor proposed the concept of "functional foremen," managers who defied the traditional military-style supervision of firms in his day. These managers did not have disciplinary power, so that their role meant supervision over some aspect of work, not the person. Disciplinary issues were left to a disciplinary committee, and managers were freed to focus on production and quality control (Clegg, S., Kornberger, M. & Pitsus, T., 2005).  The Vodafone call center has a straightforward process of dealing with discipline. Minor incidents are dealt with by a call center manager, while more serious problems may be brought before the 'cue management team'.  A call centre manager has a span of control of eight CSR's, and as a values-based organisation, good will and equality is encouraged between worker and manager, so the need for discipline is ideally avoided altogether.

Taylor incentivized suggestion schemes to encourage employees to give input on improvements they felt needed to be made. Employees "should be given the full credit for the improvement and should be paid a cash premium as a reward for his ingenuity" (Allen, et al. 2003, pg 107). Vodafone's intranet has a staff 'Blog', where employees can keep up to date with what is happening in the managerial level of the company, and they are invited to give feedback or suggestions. Employees are praised for innovative suggestions and displays of initiative, and are rewarded with anything from free phones to an all expenses paid trip in the Asia/Pacific region, depending on their KPI's and annual performance reviews.

The operation of the Vodafone call centre adopts many fundamental aspects of Scientific Management. Evidence of Taylor's methods can be found throughout the organisation, in researching, selection and distribution of employees, call centre induction training programs and performance management programs. Management teams are put in place to scientifically monitor individual employee's quality performance rates, customer service skills and job suitability. Taylor's methods of motivating workers are evident in Vodafone's incentive schemes and reward packages. Vodafone have implemented modern management styles into their operation to include a more humanistic approach, but as this essay has outlined, the basic principles of Taylor's Scientific Management are still clearly evident in the framework of their organisation.