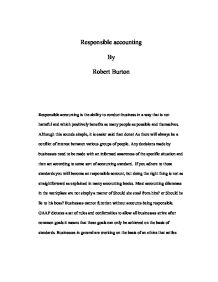 Responsible accounting is the ability to conduct business in a way that is not harmful and which positively benefits as many people as possible and themselves.

Responsible accounting By Robert Burton Responsible accounting is the ability to conduct business in a way that is not harmful and which positively benefits as many people as possible and themselves. Although this sounds simple, it is easier said than done! As there will always be a conflict of interest between various groups of people. Any decisions made by businesses need to be made with an informed awareness of the specific situation and then act according to some sort of accounting standard. If you adhere to those standards you will become an responsible account, but doing the right thing is not as straightforward as explained in many accounting books. Most accounting dilemmas in the workplace are not simply a matter of Should she steal from him? or Should he lie to his boss? Businesses cannot function without accounts being responsible. GAAP dictates a set of rules and conformities to allow all businesses strive after common goals it means that these goals can only be achieved on the basis of standards. Businesses in general are working on the basis of an ethics that settles different interests. The standards within companies can be characterized as mutual respect. In this respect it is in everyone's interest, and is considering people as an end in themselves, not as a means. This responsibility is passed down and filtered to a group of accounts who maintain the companies finances. Many people say there's always a right thing to do based on responsibly accounting, and others believe the right thing to do depends on the situation, ultimately it's up to the individual on what they do and on what they believe to be the right thing is. Accounts say that new ethical beliefs are state of the art legal matters, and that what becomes an ethical issue of today is then later made into a law. Values that say how we should behave are said to be moral values, values such as respect, honesty, fairness, responsibility. ...read more.

Deferred taxes on income represents the net tax benefit on items which have been expensed in the Statement of Income but do not yet qualify as a deduction on a tax return. They will be deductible in the future. Other Current Assets represents current assets that do not fit within the above major categories. The second category generally includes assets that are not considered available for conversion to cash in the short term: Long-Term Investments, held to maturity are generally deposits or similar type interest-bearing investments which mature after 12 months from the date of the balance sheet. Fixed Assets are essentially the property, plants and equipment owned by the company, not intended for sale and used over and over in order to produce and deliver products and services. For accounting purposes, Fixed Assets are shown on the Balance Sheet at the original purchase price less accumulated depreciation. Depreciation is the normal wear and tear of the assets held by the company due to their usage. It is an expense which is charged to the Income Statement over the useful life of the asset. Accumulated depreciation reduces the value of an asset on the Balance Sheet. Land is not subject to depreciation, and its listed cost remains the same year to year. The allowance for depreciation on the Balance Sheet represents the total depreciation taken to date on fixed assets still in service. Excess of Investment Over Net Assets of Companies Purchased: Sometimes one company will acquire a company at a price that exceeds the fair market value of the net assets of the company being acquired. This excess amount is considered to be an intangible asset, listed on the balance sheet as the Excess of Investment Over Net Assets of Companies Purchased, otherwise known in financial circles as "goodwill." This goodwill is expensed, or amortized, evenly over periods ranging up to 40 years depending on management's long-term view of the business acquired. ...read more.

The use of a single measure of productivity generally does not result in overall improvements. Management controls that focus on fundamental activities, such as quality control and service, can use productivity measures to monitor the actual benefits of the improvements in the activity. Manager must be cautious in comparing productivity measures over time. Changes in processing rates and inflation can provide misleading information. When compiling reports comparing past performance to future or present performance, adjustments must be made to be sure that the comparisons are equal. EVALUATING PERFORMANCE Managers can use performance data as a steering control. The data can be used an early warning that specific actions may be required. For example, high morale is a popular goal but one that is difficult to measure. Forecasters such as number of accidents, absenteeism, and employee turnover may be evaluated together and serve as a surrogate measure for increasing or declining morale. However, careful evaluation must be used. If the accident rate increases rapidly in the production area, it would suggest declining morale when a significant increase is caused by employee carelessness. However, if the cause is related to equipment that suddenly wears out, then there probably is not a relationship between accident rate and low morale. It is important that managers review all deviations before evaluating performance. Conditions outside of the normal operating range may have caused unexpected results. These need to be identified and included in the performance reports. Deviations can be positive as well as negative. Managers must remember to reward employees for positive deviations. To often only negative performance receives attention. This can lead to poor moral and performance.2 Managers need to be coaches. They need to provide feedback to their employees. The feedback needs to be reliable, relevantly frequent and prompt. The reliability of the information will affect how employees change the behavior or to plan in order to get on course. Frequency of information has to do with the interval for which data are received. If, for instance, costs would not normally get out of control in a snort period, then monthly reports might be adequate. ...read more.