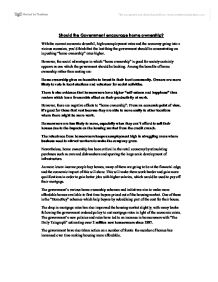 Should the Government encourage home ownership?

Should the Government encourage home ownership? With the current economic downfall, high unemployment rates and the economy going into a vicious recession, you'd think that the last thing the government should be concentrating on is pushing "home ownership" rates higher. However, the social advantages in which "home ownership" is good for society certainly appears as one which the government should be backing. Among the benefits of home ownership rather than renting are: Home ownership gives an incentive to invest in their local community. Owners are more likely to vote in local elections and volunteer for social activities. There is also evidence that homeowners have higher "self-esteem and happiness" than renters which has a favourable effect on their productivity at work. ...read more.

This will make them work harder and gain more qualifications in order to gain better jobs with higher salaries, which would be used to pay off their mortgage. The government's various home ownership schemes and initiatives aim to make more affordable homes available to first time buyers priced out of the housing market. One of these is the "HomeBuy" schemes which help buyers by subsidising part of the cost for their house. The drop in mortgage rates has also improved the housing market slightly, with many banks following the government ordered policy to cut mortgage rates in light of the economic crisis. The government's new policies and rules have led to an increase in homeowners with "The Daily Telegraph" estimating over 2 million new homeowners since 1997. ...read more.

All this has enabled benefits for those with low incomes. The Government have moved decisively to stimulate the economy and fend off a major chance of a recession or economic slowdown. The "housing market" will now almost certainly depend on the decision of "first time buyers" with over 20% of potential home buyers falling into this category. Any stalling in this section of the market would have a significant impact on the housing industry and its decreasing property values. With first-time buyers having problems with securing deposits, the initiative offered by the government combats this problem in a sensible way. Should the government continue to encourage home ownership? The answer, from both an economic and social point of view, is yes because it facilitates first time buyers and strengthens the "housing market" at a time when the UK economy is likely to face recession. ...read more.