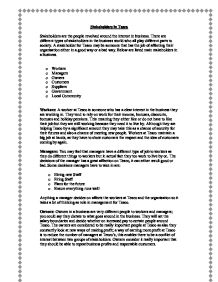 Stakeholders in Tesco Stakeholders are the people revolved around the interest in business. There are different types of stakeholders in the business world who all play different parts to society. A stakeholder for Tesco may be someone that has the job of affecting their organisation either in a good way or a bad way. Below are listed main stakeholders in a business. o Workers o Managers o Owners o Customers o Suppliers o Government o Local Community Workers: A worker at Tesco is someone who has a clear interest in the business they are working in. They tend to rely on work for their income, bonuses, discounts, bonuses and holiday pensions. This meaning they either like or do not have to like their job but they are still working because they need it to live by. ...read more.

Owners: Owners in a business are very different people to workers and managers; you could say they dictate to what goes around in the business. They will set the salary boundaries and decide whether on increased pay to certain people around Tesco. The owners are considered to be really important people at Tesco as also they constantly look at new ways of making profit; a way of earning more profit at Tesco is to reduce the number of managers at Tesco's, this enables there to be a conflict of interest between two groups of stakeholders. Owners consider it really important that they should be able to repeat business profits and respectable customers. Customers: A customer is someone who is looking to spend their money on goods. Customers are always looking to buy products; they are looking for a wide range of products that contains quality and value for money. ...read more.

Government: The government has a great interest in Tesco especially out of other leading UK supermarkets. Tesco has been able to employ a significant amount of people over the past few years, meaning more people are employed and paying taxes. This will count as a huge help for the government as they would have more money to spend on sections such as health and education. Also with more people working, the government also has to pay less income support to people unemployed, again saving money. Local Community: Over the past few years Tesco have been able to deal well with the local communities. The local community may have an interest in the business development depending on the business itself. The job of a local community is to give a planning permission if a business decides to build a new store. Successful business will also bring general wealth to a local community, which later on could help reduce crime and contribute to local projects by donations and other support. ...read more.

**** This essay includes all the main stakeholders but has not always clearly stated their interests. More could be made of the potential conflicts between stakeholders. Apart from using the word Tesco it is not really about Tesco. The name of any business could be substituted for Tesco. This is not a sign of good application. Think about the specific business.

In summary, the report is OK. The report states a number of different stakeholders and the interest that there have within the businesses financial statements. However the student clearly doesn't understand which stakeholders are important. The main ones are shareholders, ...

The section 'owner's' is quite small and too vague. The owners of the business are known as 'shareholder's and there have the largest influence within the business. The student does touch upon how shareholders want to generate increased profits, although the student could add to this. The student could add further detail and explain how shareholders often influence the buisness, by choosing the option which allows the buisness to generate profits on a short-term basis, rather than long term. The section 'Suppliers' is again too short and vague. The relationship between the supplier and the buisness is often 'give and take'. As the buisness will want a low price, although the supplier would want a large order. Thus, this may cause some disagreements at first, although there usually come to a fair agreement. It's important that suppliers can be sure that their products will be sold efficiently, and if this is broken then this causes a large issue. If there is a store without any products then the buisness dies.

The report states the term 'stakeholder', although I believe that this is slightly unclear. An 'stakeholder' is someone or an organisation which has an interest within the businesses financial statements. It's important that all technical terms are explained clearly within the report, to allow the exmainer to understand with ease.