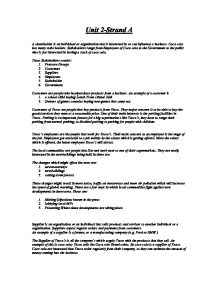 Unit 2-Strand A A shareholder is an individual or organization that is interested in or can influence a business. Coca cola has many stake holders. Stakeholders range from Employees of Coca cola to the Government to the public who is just interested in having a stock of coca cola. Tesco Stakeholders consist: 1. Pressure Groups 2. Customers 3. Suppliers 4. Employees 5. Stakeholder 6. Government. Customers are people who buy/purchase products from a business. An example of a customer is 1. a school child buying Lunch From Dinner Hall 2. Owners of games consoles buying new games that come out. Customers of Tesco are people that buy products from Tesco. They major concern is to be able to buy the goods/services they want at a reasonable price. One of their main interests is the parking facilities in Tesco. Parking is an important feature for a big supermarket t like Tesco's, they have to range their parking from normal parking, to disabled parking to parking for people with children. Tesco's employees are the people that work for Tesco's. Their main concern as an employee is the wage of the job. Employees get attracted to a job mainly by the salary which is getting offered. More the salary which is offered, the better employee Tesco's will attract. The local communities are people that live and work near to one of their supermarkets. ...read more.

If Tesco do not follow these guidelines and fit into the laws of the government, they could be easily shut down. Because of these reasons, Tesco must follow the laws of the government, which makes it them the most important stakeholder. The things in which the government doesn't influence are the type of customers that Tesco wants to attract. This can be decided by Tesco and the government can't affect them, the government also operates how much dividends is paid to Tesco's shareholders, they do this by taxing the profits businesses make. The government can edit the rates in which they tax the income/ profit being received by an individual or a company, in this case Tesco. Without following the laws of the government Tesco wouldn't be able to exist and sell their products to their customers. Customers in my opinion are the second most important stakeholders. Customers of a business are what keeps the company running, and brings the profits. Without the customers Tesco wouldn't be able to run, as they wouldn't be able to get the funds to keep the business running to pay for the costs and make profit. Customers are an important to Tesco's. Tesco's have to listen to the views and needs of the customer, and provide their needs, by doing this Tesco's will be attracting more customers which means they will be making more money, and would be able to pay their dividends higher amount of money. ...read more.

Suppliers are also interested in the regular orders and payments made by Tesco's to them, if everything Is on time and is on track then they will have a good relationship with the supplier. This is justified because this means the demand for products by the customers will always be fulfilled because Tesco's will be receiving their shipments from the supplier on time. Shareholders are one of the least important stakeholders. Tesco is a PLC, thus it doesn't have one owner and it is owned by the public. Share holders are the public that own a certain percentage of Tesco's. This means that the profit which is made by Tesco's and isn't retained within the company it will be divided by the amount of the percentage a certain shareholder owns of Tesco's. Shareholders of large PLC companies are usually visionary and they must also be quite wealthy, and should be ready to risk the amount they have invested as the company might go downhill and the price of their percentages might decrease. Shareholders only influence Tesco's because they own Tesco's, but the main decisions that have to be made are made by the shareholders who own the large amount of Tesco's. This is explained because a shareholder can at anytime sell their share. This is justified because if Tesco don't give out a good dividend, the shareholders can withdraw and sell their share and buy a share in a competing company to Tesco such as ASDA thus this keeps Tesco under pressure to always work at a high standard. ...read more.