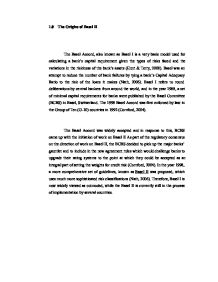 The Basel Accord (Basel II)

1.0 The Origins of Basel II The Basel Accord, also known as Basel I is a very basic model used for calculating a bank's capital requirement given the types of risks faced and the variations in the riskiness of the bank's assets (Hunt & Terry, 2008). Basel was an attempt to reduce the number of bank failures by tying a bank's Capital Adequacy Ratio to the risk of the loans it makes (Nath, 2006). Basel I refers to round deliberations by central bankers from around the world, and in the year 1988, a set of minimal capital requirements for banks were published by the Basel Committee (BCBS) in Basel, Switzerland. The 1998 Basel Accord was first enforced by law in the Group of Ten (G-10) countries in 1992 (Cornford, 2004). The Basel Accord was widely accepted and in response to this, BCBS came up with the initiation of work on Basel II As part of the regulatory consensus on the direction of work on Basel II, the BCBS decided to pick up the major banks' gauntlet and to include in the new agreement rules which would challenge banks to upgrade their rating systems to the point at which they could be accepted as an integral part of setting the weights for credit risk (Cornford, 2004). In the year 1998, a more comprehensive set of guidelines, known as Basel II was proposed, which uses much more sophisticated risk classifications (Nath, 2006). Therefore, Basel I is now widely viewed as outmoded, while the Basel II is currently still in the process of implementation by several countries. ...read more.

In other words, the option of three different approaches will enable the setting of a more precise CAR for the financing of small and medium-sized enterprises as well as provide preferential treatment for some types of risk capital (EU, 2005). Approaches that are specifically designed for capital requirements for financing small and medium-sized institutions would mean lower capital requirements for lending to such institutions and preferential treatment for certain types of venture capital. Additionally, Basel II recognises the lower risks associated with retail lending (for general purposes and house purchasing) to individuals by introducing lower capital requirements for such lending (Out-Law News, 2004). Under Pillar 1 of Basel II, there are three approaches in handling credit risk. They are the Standardized Approach, the Foundation Internal Rating Based Approach (IRB) and the Advanced Internal Rating Based Approach (A-IRB). Both the intermediate and advanced approaches require a minimum of two years' prior history of credit risks and defaults before they can be applied. These two approaches also require the ongoing collection of risk and default data to validate the risk weighting used (Unisys, 2005). Large international/ sophisticated banks will be at an advantage in using the intermediary and advanced approaches as they already have a wide history of credit risks and defaults. In addition, once a bank applies the IRB approach in a country or business line, the approach must also be implemented across all significant portfolios and business lines as quickly as possible. ...read more.

Therefore, most banks will have to rely on the standardized approach for now, which makes it harder to compete with large international rivals who are at ease with the advanced approach. The lack of regulatory harmony among different countries also poses problems for financial institutions with subsidiaries in different countries. Different countries may have different versions of banking supervision and are allowed to set their own timetable in implementing Basel II (Imeson, 2006). Problems arise for banks that operate across borders when the home and host country have different Basel II versions and are at different stages of implementing it (Imeson, 2006). Banks will be subjected to different sets of regulations, with the main bank being under the home country's regulator while their subsidiaries will be subjected to the host country regulators. Inconsistencies in regulation and the timing of implementing Basel II will render Basel II less effective as banks struggle with administrative headaches to deal with discrepancies such as different capital allocations in different jurisdictions (Imeson, 2006). Under the advanced internal ratings approach, banks are allowed to use their own credit-risk models to assess risk and determine the amount of capital reserves (Hunt & Terry, 2008). Some parties have raised concerns that this will encourage banks to underestimate their credit risk in order to have lower capital reserves and to increase their return on equity (Benink & Kaufmann, 2008). Furthermore, banks can manipulate capital levels to improve their performance (Lafalce, 2005). Such approaches will mislead investors and may worsen the ongoing financial crisis as banks strive to have lower reserves when they should be increasing their capital requirements to prepare against further crisis. (541 words). ?? ?? ?? ?? ...read more.