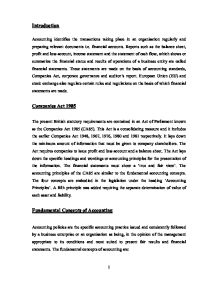 The concept of financial statement

Introduction Accounting identifies the transactions taking place in an organisation regularly and preparing relevant documents i.e. financial accounts. Reports such as the balance sheet, profit and loss account, income statement and the statement of cash flow, which shows or summarize the financial status and results of operations of a business entity are called financial statements. These statements are made on the basis of accounting standards, Companies Act, corporate governance and auditor's report. European Union (EU) and stock exchange also regulate certain rules and regulations on the basis of which financial statements are made. Companies Act 1985 The present British statutory requirements are contained in an Act of Parliament known as the Companies Act 1985 (CA85). This Act is a consolidating measure and it includes the earlier Companies Act 1948, 1967, 1976, 1980 and 1981 respectively. It lays down the minimum amount of information that must be given to company shareholders. The Act requires companies to issue profit and loss account and a balance sheet. The Act lays down the specific headings and wordings or accounting principles for the presentation of the information. The financial statements must show a 'true and fair view'. ...read more.

This is a statutory requirement of the Companies Act 1985. This report must contain a fair review of the development of the business and its subsidiary undertakings during the financial year and of their position at the end of it. It must also state the amount which they recommend should be paid as dividend and the amount which they advise to carry to reserves. The Act also require some other information to be disclosed such as, fixed assets, shares, employee involvement, business review, disabled persons, directors, etc. Auditor's Report Auditors are independent qualified accountants who specialize in auditing work. They are appointed by the shareholders at the annual general meeting (AGM). So, the report prepared by them is called auditor's report. According to the law most of the limited companies are required to get their books and annual final accounts audited by the auditors. These accounts consist of the profit and loss account and the balance sheet. There main aim is to give an opinion of, whether or not the accounts give a true and fair view of the state of affairs and the profit of the company and have been properly prepared in accordance with the Companies Act. ...read more.

The fundamental concepts of accounting are going concern, accruals or matching, consistency, prudence, separate determination and 'true and fair'. Director's and Auditor's Report are also prepared at the end of financial statement. Director's Report states the responsibilities and activities performed by the directors of the company. Auditor's Report confirms that the financial statement or accounts prepared by the company give a 'true and fair view' and ensures that is has been prepared in accordance with the Companies Act 1985. Corporate Governance and European Union (EU) also plays an important role in the preparation of the financial statement because corporate governance aims to increase the economic efficiency and investor's confidence. Whereas, European Union has established a common financial reporting requirement by issuing two Accounting Directives: the Fourth Directive (1978) and the Seventh Directive (1983). References Books Dyson, J. (2004), Accounting For Non- Accounting Students, Sixth Edition, Prentice Hall, England. Black, G. (2000), Students' Guide To Accounting And Financial Reporting Standards, Seventh Edition, Prentice Hall, England. Gillespie, I., Lewis, R. and Hamilton, K. (2000), Principles Of Financial Accounting, Second Edition, Prentice Hall, England. Thomas, A. (1992), An Introduction To Financial Accounting, Second Edition, Mc Graw Hill, London. Website: The CPA Journal (2005) Citing references [www] Available from: www.nysscpa. ...read more.