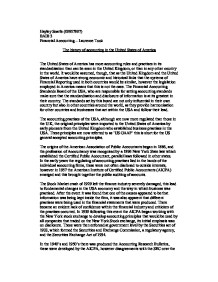 The history of accounting in the United States of America

emerged and this brought together the public auditing of accounts. The Stock Market crash of 1929 left the finance industry severely damaged, this lead to fundamental changes in the USA economy and the way in which business was practised. After the event it was found that one of the causes appeared to be that information was being kept inside the firm, it was also apparent that different practises were being used in the financial statements that were produced. There became an evident lack of confidence within the financial industry and criticism of the practises occurred. In 1930 following this event the AICPA began working with the New York stock exchange to develop accounting principles that would be used by all companies that traded on the New York Stock exchange, its initial emphasis was on disclosure. ...read more.

In 1952 it was recommended by the Wheat committee that a Financial Accounting Standards Board be formed. Unlike the APB it was recommended that there be a wider range of professions not just formed of accountants, this can still be seen today. The Financial Accounting Standards Board was guided in its work by a series of Statements of Financial Accounting Concepts (SFAC's), these were issued in the late 1980's. they stated that company's annual report and accounts must be made up of a consolidated income statement, a balance sheet and a profit and loss account, the statements are generally detailed with complex notes. But, in contrast to many other countries parent company financial statements are not provided with their subsidiaries. The FACB believe that outside interests must clearly be able to see the reported monetary gains and outgoings between one financial period to another, they have an open view as to what must be available. ...read more.