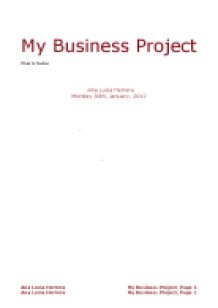 The Potential Impact of Government Policies on My Business Project,

ï»¿My Business Project Pitas & Nudos Ana Lucía Herrera Monday 30th, January, 2012 ________________ Pitas & Nudos My business Name: Pitas & Nudos Logo: Government influence upon business activity: The government has several aims that are beneficial for business activity, they are: 1. Low Inflation: It means that the prices keep rising at a normal rate, and they don’t rise too fast and if they are rising too fast the government will get involved. A low inflation encourages businesses to expand and it makes it easier for a country to sell its goods and services abroad. 2. Low Levels of Unemployment: This is too keep the number of people who don’t have a job low, because people that are unemployed produce no goods or services so the lower of output in the country will be lower than it could be. 3. Economic Growth: This is when the level of output of goods and services in the country increases. This means that the GDP increases and so does the standard living of the population. 4. Balance of Payments: The aim is to have balance between exports and imports. This is means that there should be more exports than imports. The government has 3 economic policies to achieve the aims above. This policies influence business activity in a variety ways and I will explain them further. The way in which they influences business activity are many and the variety of strategies used are extensive. The economic polices used by the the government are: 1. Fiscal Policy – taxes and government spending 2. ...read more.

Borrowers, of course, would love this situation, while lenders would be disinclined to make any loans. Supply Side Policies: These are used by the government to improve the efficient supply of goods and services in there is in their country. Government have try to make their economy more efficient. Their aim is no increase their competitiveness against the industries from other countries. They want their businesses to succeed expand and employ more workers. This is when they created some policies that are called supply side policies. Some of the policies are: 1. Privatization: it is the aim is to use the profit motive to improve business efficiency. 2. Improve training and education: it is when the government plans to improve the skills and education of the country?s citizens to have more skilled workers. 3. Increase competition in all industries: this may be done by reducing government control over industry or by acting in opposition of monopolies. The areas that are mainly directly controlled by the government are: 1. Production decisions - what firms cannot produce and can produce 2. Responsibilities to employees 3. Responsibilities to consumers 4. Responsibilities to the natural environment 5. Local decisions How does the Salvadorian government affect my business? My business ?Pitas & Nudos? is in the Art and Crafts Centre, so the government does indeed affect my business. All the economic policies are applied on my business that means that I have to pay taxes and all those things, this is not so good for me and my income, but the money gained in taxes will later help the government build things for the public. ...read more.

If they work extra hours I have to pay them. Also, I have to pay them according to how much work they do. There is also a ministry in El Salvador called ?El Ministerio del Medio Ambiente? which protects the environment. So, if I am producing many waste in my business and I have to get rid of it, this ministry makes me get rid it in a garbage bin or in recycle bins but not in rivers or in the sea, this can cause many diseases that can lead to death or other things. This law also doesn?t allow me to burn the garbage because that can damage the atmosphere and the environment. ?La Superintendencia del Sistema Financiero? this is a part of the government which is the one that control how much you have to pay when you do a loan. So, if I want to make a loan to pay for air conditioning if this sector want to put a high interest rate I wouldn?t be able to make the loan. So, they affect my business in that way. Finally, you can see that the government makes a huge impact on business activity and on businesses, as you can see they make all these policies to find a way to gain money for the public, but they are also looking for ways to make businesses succeed and expand. I can also conclude saying that without this economic policies businesses would be a chaos and there would be no expanding or output for the government so this might not help the country. Ana Lucia Herrera My Business Project, Page Ana Lucia Herrera My Business Project, Page ...read more.