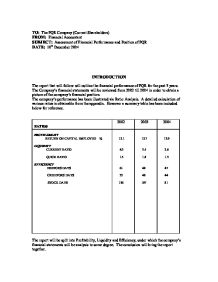 TO: The PQR Company (Current Shareholders)

TO: The PQR Company (Current Shareholders) FROM: Financial Accountant SUBJECT: Assessment of Financial Performance and Position of PQR DATE: 10th December 2004 INTRODUCTION The report that will follow will outline the financial performance of PQR for the past 3 years. The Company's financial statements will be reviewed from 2002 till 2004 in order to obtain a picture of the company's financial position. The company's performance has been illustrated via Ratio Analysis. A detailed calculation of various ratios is obtainable from the appendix. However a summary table has been included below for reference. RATIOS 2002 2003 2004 PROFITABILITY RETURN ON CAPITAL EMPLOYED % LIQUIDITY CURRENT RATIO QUICK RATIO EFFICIENCY DEBTORS DAYS CREDITORS DAYS STOCK DAYS 12.1 4.3 1.5 61 33 136 12.7 3.5 1.8 48 48 107 13.0 2.6 1.3 47 44 81 The report will be split into Profitability, Liquidity and Efficiency, under which the company's financial statements will be analysis to some degree. The conclusion will bring the report together. PROFITABILITY As can be seen from the data supplied sales have increased from �3,600,000 to �4,010,000, an increase of 11%. Calculation based on the difference between 4,010 and 3,600, over 3,600. At the same time cost of sales fell. ...read more.

Nevertheless with that in mind the calculated figures for the quick ratio have fluctuated. This basically indicates in some years stock turnover was slow and in other years it was high. Stock in 2004 turned over the slowest in comparison to the other two years. Both these ratios give the company the indication of its liquidity; however in theory a Current ratio of 1.5 and Quick ratio of 0.8 is acceptable. Using this as a yard stick PQR's ratios are some what way off. Due to the size of the ratio's it can be argued the company is over investing in its working capital. It is tying up more funds then necessary, suggesting poor management. EFFICIENCY Debtor days are a rough measure of the average length of time it takes for a company's debtors to pay what they owe. Figures from the calculated ratio shows it has fallen quite significantly. As can be seen from, it started off from 61 days in 2002 and end up at 47 days in 2004. The company seems to have improved its credit control department whereby it may have introduced new internal controls. However in comparison to the amount of purchases it's making it could be argued it is reasonable. ...read more.

Again reflection can be made to the company's internal controls, which must have improved. CONCLUSION Ratios are used to assess financial performance of a company by comparing the calculated figures between pervious years. Such an approach for analysis of company's accounts will have its benefits and drawbacks. The major advantage is it enables meaningful information to be identified within financial statements. It allows the company to view whether aspects of the business are improving or declining. Ratio analysis covers a wide range of areas from profitability to investment. However like any other approach it does have its drawbacks. Probably the most important aspect of using ratios is that they do not give the answers to the assessment of how well the company has performed, they only raise questions. Ratio analysis allows managers to change figures, making users think a favourable position has arisen. Another drawback is there are various definitions to accounting ratios, different components can be applied. Therefore its reliability can be questioned. In the end there is no right or wrong answer to the analysis of ratios, various calculations can be carried out. On its own it cannot be considered to be enough in terms of interpreting a company's financial statements. An overall picture of the company is okay, improvements have been made especially with the efficiency ratios. Profitability and liquidity ratios seem quite stable. ...read more.

In summary, the report is relatively a high standard. The report focuses on three areas of the buisness, and explains a little regrading each one. However some sections do not justify why the buisness may need a certain aspect or ...

In summary, the report is relatively a high standard. The report focuses on three areas of the buisness, and explains a little regrading each one. However some sections do not justify why the buisness may need a certain aspect or why the buisness may want to increase the amount of cash the buisness holds. The student has set out their letter out correctly, with using an 'TO', 'FROM', 'SUBJECT' and 'DATE'. This will gain the student 1 mark within the exam, and this might be small, although this is a good start. The student makes clear that there are going to be reviewing three aspects of the financial statements, these are Profitability, Liquidity and Efficiency. This allows the exmainer to understand what the student is going to state within the report, this is quite clear. The report makes clear that the efficiently of the buisness underlies with the amount of time it takes for the buisness to receive payment from their debtors. The student understands that the quicker the buisness receives money, the better this is for the company.

The report states that liquidity is the ability to raise cash. Although why would the business need cash? The report doesn't mention why the business would want cash, and how this may impact upon the business. The report could include 'The buisness would want a reasonable amount of cash within the buisness to ensure that there can pay all their expenses within a timely manner, otherwise there risk going to administration. In addition, the buisness may want to generate cash quickly if it's an fashion buisness, whereby all their products will need to be sold quickly for the next season, which there need cash to invest in their next product line'.