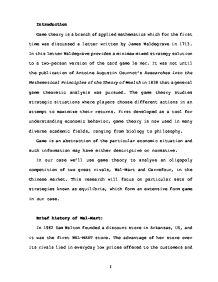 Use game theory to analyze an oligopoly competition of two great rivals, Wal-Mart and Carrefour, in the Chinese market.

Introduction Game theory is a branch of applied mathematics which for the first time was discussed a letter written by James Waldegrave in 1713. In this letter Waldegrave provides a minimax mixed strategy solution to a two-person version of the card game le Her. It was not until the publication of Antoine Augustin Cournot's Researches into the Mathematical Principles of the Theory of Wealth in 1838 that a general game theoretic analysis was pursued. The game theory studies strategic situations where players choose different actions in an attempt to maximize their returns. First developed as a tool for understanding economic behavior, game theory is now used in many diverse academic fields, ranging from biology to philosophy. Game is an abstraction of the particular economic situation and such information may have either descriptive or normative. In our case we'll use game theory to analyze an oligopoly competition of two great rivals, Wal-Mart and Carrefour, in the Chinese market. This research will focus on particular sets of strategies known as equilibria, which form an extensive form game in our case. Brief history of Wal-Mart: In 1962 Sam Walton founded a discount store in Arkansas, US, and it was the first WAL-MART store. The advantage of her store over its rivals lied in everyday low prices offered to the customers and a promise of satisfaction together with high quality goods supplied. In the early 70's Wal-Mart extended its operation all around the USA and started opening stores abroad. There were branches set in Canada, Mexico, Brazil and Western Europe. The first Wal-Mart superstore was established in Montana in 1988. The super centre was a new type of stores which was created through combination of a grocery store with a discount store. Wal-Mart had succeeded in selling general merchandise and durables, but besides that its managers wanted to make profits in grocery for people shop for food twice as often as for the other goods. ...read more.

Six Carrefour stores in Shanghai, for example, make the revenue of nearly 30 billion RMB a year. That's a challenge for Wal-Mart. Nevertheless, opportunity never waits for anyone. Though the retailers competed in front line cities, they had to follow the government restrictions. Wal-Mart opened only one store in PuDong, a new district in Shanghai, and couldn't enter the central part for the government had stated that all chain stores or large markets were to be regulated. Business program of 2003 restricted the number of hypermarkets (larger than 10000 square meters) - within the inner city there could be not more than 60 and the existing number of hypermarkets within Shanghai is more or less 60. Even though Wal-Mart enters some cities, the location is doubtful. The reason for this is Wal-Mart's low cost strategy which led to stores location in devious areas where rents are lower. This strategy worked well in the US because its community is not concentrated and car is a commonplace vehicle. In China cities the population is locally distributed. Even in metropolitan cities satellite towns are still under construction. Moreover, cars are not common for household use; the majority of people are still shopping within walking distance or using public conveyances. Consequently, the cost reduction strategy of Wal-Mart China is not optimal and restricts customers' liquidity. Comparing with Wal-Mart, Carrefour acts smarter when choosing a place to situate a store. According to my investigation, nearly all Carrefour stores locations are more appropriate to compromise China household shopping activities. Since 11 years ago Carrefour had entered China market, it was insisting on launching its stores in business commercial areas. For example, in Chongqing two Carrefour stores were opened: in JieFangBei and GuanYin Bridge flourishing shopping centers. On the contrary, Wal-Mart chose west village which is quite far from business and residential areas. (This situation may change later due to the completion of city light-train) ...read more.

Again, over-area chain distribution is hard to actualize. All these realities indicate that it is hard for Wal-Mart to have no solid operational basis which would have to repeat the US success. However, the significant thing is the scale of stores - it is Wal-Mart China's current weakness. Wal-Mart retorts Having faced such an enormous market opportunity Wal-Mart appears to be much weaker than Carrefour. Firstly, Carrefour occupied front line cities. Secondly, Carrefour's policy is more localized and recognized widely. Of course, Wal-Mart endeavors to build up close relationships with China market, it even compromises with Chinese national union that allows it to construct a union, but it is known that Wal-Mart is against unions in other countries. Although Wal-Mart did not agree, having considered all pros and cons it had to make a compromise finally. Wal-Mart China CEO decides to expand in second and third level cities further to increase the density of stores and, hence, solve many problems. Conclusion Entering an international market requires any company to use certain specific and unique for each country strategies to gain an immense success. Having discussed and analyzed an oligopoly competition of two large corporations, we can come to a conclusion that even if there is only one serious competitor in the country's market, the company should never forget that it is a guest in the country and, hence, should, first of all study the country's tastes and demands before offering any product or service. Wal-Mart's mistake consists in using the same strategies that were used in the United States. Yes, they were successful, but one must consider that the Chinese market is a completely different thing: different culture, different legislative regulations, laws and policies, different tastes. National culture - a concept which includes a great number of specific issues - is one of the first factors to be evaluated when starting business in a foreign country, was almost completely underestimated by Wal-Mart and, in its turn, made it become weaker in comparison with Carrefour. ?? ?? ?? ?? 1 ...read more.