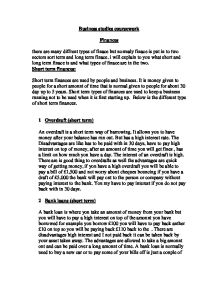 Business studies coursework Finances there are many diffrent types of finace but normaly finace is put in to two sectors sort term and long term finace. i will explain to you what short and long term finace is and what types of finace are in the two. Short term finances: Short term finances are used by people and business. It is money given to people for a short amount of time that is normal given to people for about 30 day up to 5 years. Short term types of finances are used to keep a business running not to be used when it is first starting up. Below is the different type of short term finances. 1 Overdraft (short term) An overdraft is a short term way of barrowing. It allows you to have money after your balance has run out. But has a high interest rate. The Disadvantages are like has to be paid with in 30 days, have to pay high interest on top of money, after an amount of time you will get fines , has a limit on how much you have a day. The interest of an overdraft is high. There are is good thing to overdrafts as well the advantages are quick way of getting money, if you have a high overdraft you will be able to pay a bill of �1,500 and not worry about cheques bouncing if you have a draft of �5,000 the bank will pay out to the person or company without paying interest to the bank. ...read more.

In order for the payment to occur, the seller has to present the bank with the necessary shipping documents confirming the delivery of goods within a given time frame. It is often used ininternational trade to eliminate risks such as unfamiliarity with the foreign country, customs, or political instability. Long term finances Long term finances is normal a large amount of money that you pay back over a large amount of time. With this you will have to pay interest on top of the money you have to pay back to the bank or money lending companies. 1 Taking a new partner (long term) This allows someone to buy in to the business which means more capital in to the company. There are disadvantages are that more people are in the company and you do not get 100% of the profits you will have to share them with other investors in the company. There is anther disadvantage is you have ask other people if you want to change anything about the business for permissions first. There are advantage are more money in the company and less reliable. 2 Share issues (long term) This allows a number of people to enter the company which brings in more money in to the companies. Share issues or share holder are the people that own the business together they will pay something like �1.59 a share this mean that that person with own 1 share of the company. ...read more.