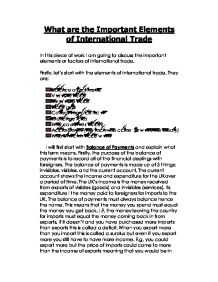 What are the important elements of International Trade

What are the Important Elements of International Trade In this piece of work I am going to discuss the important elements or factors of international trade. Firstly, let's start with the elements of international trade. They are; * Balance of payments * Visible trade * Invisible trade * Trade gap * Correcting a deficit * Exchange rates * Why countries trade? * Adam Smith (The man who came up with the theory) * Who Britain trade with I will first start with Balance of Payments and explain what this term means. Firstly, the purpose of the balance of payments is to record all of the financial dealings with foreigners. The balance of payments is made up of 3 things; invisibles, visibles, and the current account. The current account shows the income and expenditure for the UK over a period of time. The UK's income is the money received from exports of visibles (goods) and invisibles (services). Its expenditure I the money paid to foreigners for imports to the UK. The balance of payments must always balance hence the name. This means that the money you spend must equal the money you get back. I.E. the money leaving the country for imports must equal the money coming back in from exports. If it doesn't and you have purchased more imports than exports this is called a deficit. ...read more.

Other ways that you could bring the gap to be balanced would be to offer better quality products so that more people would want them causing more exports. They would go up like this. Other ways of closing this gap would be UK companies advertising abroad, the government could subsidise UK exporters and also you could have car shows to bring foreign people over to buy our cars. Other ways of bringing the import gap down would be to have a tariff - import duty, and import quota which would limit the amount you can import, and embargo but other countries may retaliate, and also and exchange control, which is limiting the amount of foreign currency used. There is however a certain type of import control that isn't allowed or has to be agreed upon. This is called GATT which stands for General Agreement on Tariffs and Trade. This means that countries have to agree to reasons for allowing import duties. The next type of element that I am going to do is exchange rates. First of all an exchange rate is the amount of foreign currency you can get for your money. If you were to go on holiday to Italy you would want your great British pounds to be changed into the euro. ...read more.

In this final part of my essay I am discussing the European Union. Britain is part of the E.U (European Union) which is an organization consisting of 25 independent, democratic member states which will be 27 as of the 1st January 2007. Britain can trade for free with all the members of the EU but if you are outside of the European Union then you have to pay to trade. Think of it as paying to get over a wall into a cool group. All of the members in the EU pay annually into an EU fund based on GDP (Gross Domestic Product), which is the Wealth of the Nation. The common currency in the European Union is the Euro and 12 out of the 25 use it, 13 out of 27 as of the 1st January 2007. There are benefits for trading within the EU; benefits such as if someone from for example Poland wanted to come and work in the UK then you wouldn't' have to pay them the maximum wage so you can imagine if there are more and more people working in the UK then we don't lose as much money as we would if we were paying people who are from the UK. In my essay I have covered the points that are included in the topic of International Trade. I think I have fully expressed each point to my best ability and I hope I have made it clear. ...read more.