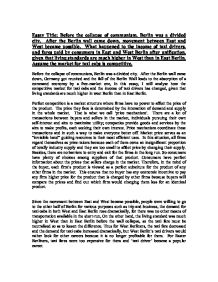 What happened to the income of taxi drivers, and fares paid by consumers in East and West Berlinafter unification, given that living standards are much higher in West than in East Berlin. Assume the market for taxi cabs is competitive.

the short-run, On the other hand, the living standard was much higher in West than in East Berlin before the wall collapse, so the taxi fare must be neutralised so as to lessen the difference. Thus for West Berliners, the taxi fare decreased and the demand for taxi cabs increased dramatically, but West Berlin's taxi drivers would rather look for other careers because it is no longer profitable for them. For Easter Berliners, taxi fares were too expensive for them and 'taxi driver' became a popular career. Figure 1 Figure 2. Source: http//www.tutor2u.net/decks/econdeck50.asp Since each taxi firm or driver is a price taker in a perfectly competitive market, the demand curve is perfect elastic: Demand=Average Revenue (Taxi Fare)=Marginal Revenue (Figure 1), price acts as signals to help the process of resource allocation. 'If the average cost (AC) curve dips below the average revenue (AR) curve, the firm will earn supernormal profit.'(P123 Sloman, 2001), the supernormal profit is the yellow shaded rectangle in figure 2. ...read more.

There was an excess demand for taxi cabs, so taxi fares went up and taxi drivers could earn a lot of profit from it. But in the long run where the market of taxi reached equilibrium, driving taxis became not so profitable since the living standards went up and 'no barrier to entry' made people from other industries join the taxi market, it would lead to excessive supply. When most firms in a market are price takers, there is only small difference among the prices of identical products within the market. Competition thus drives an improvement in economic welfare and efficiency. 'Competition forces under-performing firms out the market and shifts market share to more efficient firms in the long run, also it encourages firms to innovate and adopt best-practise techniques.' (http://www.tutor2u.net/decks/econdeck50.asp) Since competition of taxis got fiercer, some low-quality taxis were no longer profitable, so they would probably face bankruptcy and then quit the market. In that case, taxi fares remain the same and will only increase with the inflation rate, so as the income of taxi drivers. Therefore, as long as the equilibrium price is charged, the market would perform in its right way. ...read more.

****
This is a very hard topic and question for GCSE level and on the whole the writer does well with it. They use the theory well and apply it to taxi drivers consistently. There are a few errors which is understandable given the complexity of the subject.