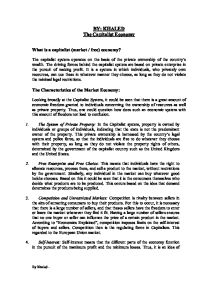 What is a capitalist (market / free) economy? The capitalist system operates on the basis of the private ownership of the country's wealth

BY: KHALED The Capitalist Economy What is a capitalist (market / free) economy? The capitalist system operates on the basis of the private ownership of the country's wealth. The driving forces behind the capitalist system are based on private enterprise in the pursuit of making profit. It is a system in which individuals, who privately own resources, can use these in whatever manner they choose, as long as they do not violate the minimal legal restrictions. The Characteristics of the Market Economy: Looking broadly at the Capitalist System, it could be seen that there is a great amount of economic freedom granted to individuals concerning the ownership of resources as well as private property. Thus, one could question how does such an economic system with this amount of freedom not lead to confusion. 1. The System of Private Property: In the Capitalist system, property is owned by individuals or groups of individuals, indicating that the state is not the predominant owner of the property. ...read more.

Having a large number of sellers ensures that no one buyer or seller can influence the price of a certain product in the market. According to "Economics Explained", competition imposes limits on the self-interest of buyers and sellers. Competition then is the regulating force in Capitalism. This regarded to the European Union market. 4. Self-Interest: Self-interest means that the different parts of the economy function in the pursuit of the maximum profit and the minimum losses. Thus, it is an idea of self-interest that "is the guiding light of Capitalism"1. Examples of these market are in the Middle East market. 5. The Pricing System: The Capitalist system is based on the prices set for products, which are determined by factors, including competition, supply, demand, and monopolies. Since the prices are not fixed, incentives and motivation of the entrepreneurs and manufacturers increase. 6. The Limited Role of the Government: The role of the government is to protect the property rights of the workers and entrepreneurs, and to keep control of the property vested with the owners. ...read more.

Some Disadvantages of the Market Economy: Despite the characteristics mentioned above, a capitalist economy could lead to extremism in the sense that wealth may be concentrated in the hands of a few businessmen, thus, creating extreme wealth versus extreme poverty. This disparity in wealth could, in the long run, lead to recession or even depression in the economy. Furthermore, a common feature of a Market Economy is the rise of monopolies and the setting of unfair prices. Moreover, since the driving force of capitalism is profit making, some industries, albeit not profitable but still necessary, may be ignored. Examples include keeping a non-profit-making factory open so as to avoid lying off workers, or extending a bus service to a remote part of the country. Nevertheless, it could be said that the market economy is one that has benefited millions throughout the world. However, the question as to how far this system is a good one remains a controversial issue. 1 This is quoted from the book, "Economics Explained". ?? ?? ?? ?? By Khaled - ...read more.