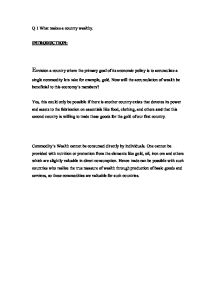 What makes a country wealthy.

Q 1 What makes a country wealthy. INTRODUCTION: Envision a country where the primary goal of its economic policy is to accumulate a single commodity lets take for example, gold. Now will the accumulation of wealth be beneficial to this economy's members? Yes, this could only be possible if there is another country exists that devotes its power and assets to the fabrication on essentials like food, clothing, and others and that this second country is willing to trade these goods for the gold of our first country. Commodity's Wealth cannot be consumed directly by individuals. One cannot be provided with nutrition or protection from the elements like gold, oil, iron ore and others which are slightly valuable in direct consumption. Hence trade can be possible with such countries who realize the true measure of wealth through production of basic goods and services, so these commodities are valuable for such countries. Figures shows the circular cycle of the economic world. Adam Smith was the first to realize that the Wealth of a Country was neither in the accumulation of commodities nor in the resource reserves that a country may happen to possess. But rather wealth exists in the productive knowledge of its people. The ability to efficiently transform resources (factor inputs) into desired goods and services represents the true source of a country's wealth. COUNTRY'S WEALTH A country wealth consists of its economic factors like natural resources, human resources, capital, enterprise, technology etc. These factors help in the economic development of the country. However economic development is not possible so long as the social institutions cultural attitudes, institutional and political conditions and morel values in a nation do not encourage development and are non economic factors in economic development. ...read more.

Income consists of labor earnings, property income and Government transfer payments. National income consists of the labor earnings and property income generated by the economy in a year. Government takes a share of that national income in the form of taxes and gives back part of what it collects as transfer payments, the post tax personal income of an individual includes the return on all the factors of production, labor and property that the individual owns plus transfer payments from the government less taxes. Wealth consists of the net dollar value of assets owned at a given point of time. Wealth is a stock, while income is a flow per unit of time. A house hold's wealth includes its tangible items such as houses and its financial holdings such as bonds. Items that are of value are called assets while those that are owed are called liabilities. The difference between total assets and total liabilities is called wealth or net worth. NON ECONOMIC FACTORS Non economic factors such as social, cultural and political organizations influence the economic factors and have great importance. CULTURAL ATTITUDES: There are religious and cultural traditions which are not conducive to economic development. Religion gives less inducement to the virtues of thrift and hard work. People are fatalists and therefore do not like to work hard. They are more influenced more by traditional customs and place high values on leisure, contentment and participation in festivals and ceremonies. Thus money is wasted in non economic ventures. Cultural attitudes stand in the way of progress and they keep social economic and political institutions in a state of back ward ness. Thus they are inimical to economic development of the country. People should be imbibed with such religious ideas that may induce them to toward economic progress. ...read more.

So also have the products that have eliminated much of the drudgery formerly associated with housework. Dishwashers, detergents, disposable nappies, washing machines, vacuum cleaners, microwave ovens, refrigerators, were not there to help our great-grandparents when they first set up house. GLOBALIZATION: Another aspect of the constant change that occurs in evolving market economies is the globalization that has been occurring at an accelerating rate over the last two decades. At the heart of globalization lie the rapid reduction in transportation costs and the revolution in information technology. The cost of moving products around the world has fallen greatly in recent decades. More dramatically, our ability to transmit and to analyze data has been increasing dramatically, while the costs of doing so have been decreasing, equally dramatically. On the investment side, the most important result of globalization is that large firms are seeking a physical presence in many major countries. In the 1950s most foreign investment was made by US firms investing abroad to establish a presence in foreign markets. Today, most developed countries see major flows of investment in both directions, inward as foreign firms invest in their markets, and outward as their own firms invest abroad. It is also interesting to note that globalization of investment had big effects on what 'national interest' means. The pension funds and personal savings of most UK citizens are now internationally diversified, making them less dependent upon the future success of Britain. Instead, the citizens of most advanced industrialized countries are accumulating shares in the world economy. The world is truly globalizing in both its trade and investment flows. Today no country can take an isolationist economic stance and hope to take part in the global economy where an increasing share of jobs and incomes are created. ...read more.