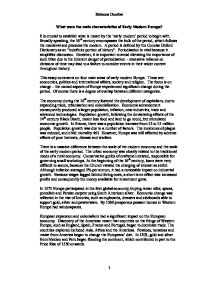 What were the main characteristics of Early Modern Europe?

What were the main characteristics of Early Modern Europe? It is crucial to establish what is meant by the 'early modern' period to begin with. Broadly speaking, the 16th century encompasses the bulk of the period, which follows the medieval and precedes the modern. A period is defined by the Concise Oxford Dictionary as an "indefinite portion of history". Periodisation is vital because it simplifies discussion. However, it is important to avoid elevating the importance of such titles due to the inherent danger of periodisation - excessive reliance on divisions of time may lead to a failure to consider events in their wider context throughout history. This essay comments on four main areas of early modern Europe. These are: economics, politics and international affairs, society and religion. The focus is on change - the named aspects of Europe experienced significant change during the period. Of course there is a degree of overlap between different categories. The economy during the 16th century fostered the development of capitalism, due to expanding trade, urbanisation and colonialisation. Economic advancement consequently produced a larger population, inflation, new industries, trade and advanced technologies. ...read more.

It is important to recognise that although the early modern period was a time of enormous change, social structure is one of the things that changes very slowly by comparison. An example is the way family worked. Today's model of parents and children as a single unit was alien in the 16th century. Several generations, including cousins, grandparents and servants, occupied the same dwelling. The role of women was changing - they were made less economically independent and second-class citizens to men, whereas during the medieval period they had had some economic influence. Classes were not commonly spoken of - instead social 'orders' was the term used, which were determined by rank instead of economic status. Theoretically, there were three 'orders' - at the top was the nobility, then monks and priests, with townsmen and peasants at the bottom of the heap. But in reality it was more complicated and less clear-cut than this. The nobility was exempt from direct taxation, because they fought for the state. Some churchmen were social equals of the nobility. This reflected the attitude towards religion prevalent at the time (although this changed to a certain extent during the period, due to the increase in secularism). ...read more.

It led to a faster spread of Luther's and Calvin's ideas across the continent, which may have contributed to the ignition of the Reformation in the 16th century, starting in Germany, and spreading to England and elsewhere, which was followed by the Counter Reformation as the Catholic Church sought to regain Church lands lost to Protestantism. Both the Reformation and the Renaissance are recognised as widespread, long lasting revolutions, which were unheard of during the Middle Ages. This has to be partly contributed to the advent of printing. This brief, and in places, inaccurate comment on aspects of the early modern period is greatly lacking in its depth of exploration. The topic is a huge one and naturally has a variety of outlooks as to the importance of various characteristics. However, it is clear that the 16th century was a time of immense change in some areas, such as schools of thought and the Church, while others changed painfully slowly, such as social structure. Change in the early modern period is dominated by individuals such as Luther and Calvin, who had lasting effects on the way the modern world is shaped. Indeed, the 15th and 16th centuries saw developments which have lasted long beyond their own frontiers. Rebecca Doorbar 1 ...read more.