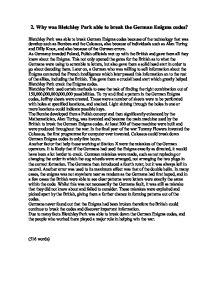 2. Why was Bletchley Park able to break the German Enigma codes? Bletchley Park was able to break German Enigma codes because of the technology that was develop such as Bombes and the Colossus, also because of individuals such as Alan Turing and Dilly Knox, and also because of the German errors. As Germany invaded Poland, Polish officials met up with the British and gave them all they knew about the Enigma. This not only opened the gates for the British as to what the Germans were using to scramble to letters, but also gave them a solid head start in order to go about decoding them. ...read more.

Light shining through the holes in one or more locations could indicate possible keys. The Bombe developed from a Polish concept and then significantly enhanced by the Mathematician, Alan Turing, was invented and became the main machine used by the British to break the German Enigma codes. At least 200 of these machine were built and were produced throughout the war. In the final year of the war Tommy Flowers invented the Colossus, the first programme for computer ever invented. Colossus could break down German Enigma codes in only few hours. Another factor that help those working at Station X were the mistakes of the German operators. ...read more.

In many cases, the enigma was not anywhere near as random as the Germans had first hoped, and in a few cases the British were able to see clear patterns were letters were exactly the same within the code. Whilst this was not necessarily the Germans fault, it was still as mistake that they did not know about and failed to consider. These mistakes were exploited and picked apart by the British, giving them a further chance in forming patterns out of the codes. Germans never found out that the Enigma had been broken therefore the British could continue to break the codes and discover important information. Due to many facts Bletchley Park was able to break down the German Enigma codes, and the people who worked there played a major role in helping win the war. (516 words) ...read more.