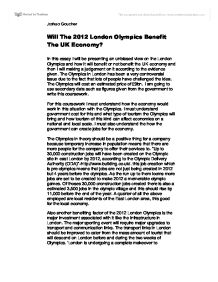 Will The 2012 London Olympics Benefit The UK Economy?

Will The 2012 London Olympics Benefit The UK Economy?

In this essay I will be presenting an unbiased view on the London Olympics and how it will benefit or not benefit the UK economy and then I will making a judgement on it according to the evidence given. The Olympics in London has been a very controversial issue due to the fact that lots of people have challenged the idea. The Olympics will cost an estimated price of £9bn. I am going to use secondary data such as figures given from the government to write this coursework.

The Olympics in theory should be a positive thing for a company because temporary increase in population means that there are more people for the company to offer their services to. “Up to 30,000 construction jobs will have been created on the Olympic site in east London by 2012, according to the Olympic Delivery Authority (ODA)’’-http://www.building.co.uk/. this job creation which is pre olympics means that jobs are not just being created in 2012 but 4 years before the olympics. As the run up to them looms more jobs are set to be created to make 2012 a memerable olympic games. Of thoses 30,000 cronstruction jobs created there is also a estimated 3,500 jobs in the olympic village and this should rise by 11,000 before the end of the year. A quarter of all the above employed are local residents of the East London area, this good for the local economy.

Also another benefiting factor of the 2012 London Olympics is the major investment associated with it like the infrastructure in London. The major sporting event will require major upgrades to transport and communication links. The transport links in London should be improved to cater from the mass amount of tourist that will descend on London before and during the two weeks of Olympics. ‘London is undergoing a complete makeover to accommodate the Games. A mix of new, old, historic and temporary buildings and complexes will be used as Olympic venues.’-http://www.fco.gov.uk/.

The Olympics is expected to attract 10’000s on spectators and tourist to London. The high number of tourist mean that tourist related services such as hotels and restaurants will see a growth in business which is also a benefit to the economy in itself but with the mass’s of tourist being in London for a couple of weeks the services will make the most of this and will try their hardest to compete for the trade, but by the end of the Olympics will all the upgrade in tourist services be a waste? After the Barcelona Olympics the city saw a significant rise in tourist numbers (http://www.economicshelp.org) and the long term effects of the Olympics were visible.

After reading and evaluating all the evidence given and the costs I have come to a conclusion that the 2012 London Olympics will benefit the UK economy taking into account the money that will need to be spent to make the London Olympics a memorable one.