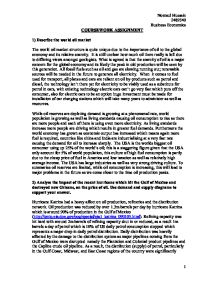 COURSEWORK ASSIGNMENT 1) Describe the world oil market The world oil market structure is quite unique due to the importance of oil to the global economy and its relative scarcity. It is still unclear how much oil there really is left due to differing views amongst geologists. What is agreed is that the scarcity of oil is a major concern for the global economy and its likely the peak in old production will be seen by this generation. All fossil fuels such as oil and gas are slowing running out; renewable sources will be needed in the future to generate all electricity. When it comes to fuel used for transport, all planes and cars are reliant on oil by-products such as petrol and diesel, the technology isn't there yet for electricity to be viably used as a substitute for petrol in cars, with existing technology electric cars can't go very fast which puts off the consumer, also for electric cars to be an option huge investment must be made for installation of car charging stations which will take many years to administer as well as resources. While oil reserves are depleting demand is growing at a phenomenal rate, world population is growing as well as living standards causing oil consumption to rise as there are more people and each of them is using even more electricity. ...read more.

Barriers to entry are very high making it impossible for firms to enter the market, this allows the monopoly firm to make abnormal profits, they are price makers not price takers. Oligopoly: Oligopolistic market is when a few firms have most of the market share, they usually don't compete on price, and their products are usually homogeneous or differentiated. By dominating the market together they have the ability to set prices. In an oligopolistic market firms sometimes have the ability to collude and set prices higher in order increase profit maximisation. High barriers to entry usually exist to put off new entrants such as high setup cost in high tech markets or high advertising costs such as in the UK soap powder market. I think the oil market resembles a oligopoly as there a few suppliers and a very large market, OPEC members collude to control world price, although they only control 40% of supply due to price elasticity of demand for oil being very low they are able to influence the price. Barriers to entry are high as oil production is restricted to those countries that have reserves. I think there is a small difference to the traditional form of the oligopoly as OPEC although it represent many oil producing countries it ...read more.

will increase as well as the cost of production, people can live without them more easily rather than heating, in general the more of a luxury the product it is the less the increased cost will be passed as more people will make do it without it. Newly industrialised countries will suffer greatly as these industries will make up most of their economic output which will all suffer due to the increased of power, while developed countries like the UK will suffer proportionally less as the services sector is larger as a percentage of total economic output compared to third world countries. Developed countries produce more high tech goods which in terms of the cost of production the fuel required is proportionally a less significant amount compared to less high tech products being produced in nearly industrialised countries such as China where the cost of power is a much larger proportion of the cost of production. In the long run new sources of fuels will have to be used such as other fossil fuels such as natural gas as well as nuclear power, investment in renewable energy sources will increase as all fossil will run out in the future and the main solution will be renewable energy sources such as solar and wind. ...read more.