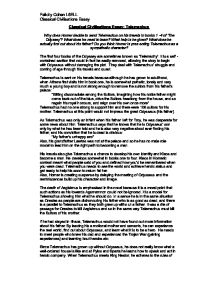 Classical Civilisations Essay: Telemachus Why does Homer decide to send Telemachus on his travels in books 1-4 of 'The Odyssey'? What does he need to learn? What help is he given? What does he actually find out about his father? Do you think Homer is presenting Telemachus as a sympathetic character? The first four books of the Odyssey are sometimes known as 'Telemachy'. It is a self-contained section that could in fact be easily removed, allowing the story to begin with Odysseus without damaging the plot. They deal with Telemachus' struggle and coming of age through his travels and quest. Telemachus is sent on his travels because although he has grown to adulthood, when Athene first visits him in book one, he is somewhat pathetic, lonely and very much a young boy and is not strong enough to remove the suitors from his father's palace: "Sitting disconsolate among the Suitors, imagining how his noble father might come back out of the blue, drive the Suitors headlong from the house, and so regain his royal honours, and reign over his own once more" Telemachus had no one strong to support him and there were 108 suitors for his mother. Telemachus at this point would not impress the great Odysseus (his father). As Telemachus was only an infant when his father left for Troy, he was desperate for some news about him. ...read more.

Athene helps him to learn as he addresses Nestor properly: "Nestor, Pride of the Acheans, Neleus' son" And all this serves to builds up his Kleos further. Telemachus is given help on his journeys. Athene comes down to the palace in disguise of one of Odysseus' old friends (Mentes) and then Mentor, and tries to stir Telemachus up by describing is father and the wonderful respect he was held in. She then inspires Telemachus at the feast in Pylos in two ways. First of all she says to him: "Where your own intelligence fails, a god will inspire you" And also that: "The gods have blessed both your birth and your progress to manhood", giving him confidence and making him feel special and safe as the gods were watching over him and giving him inspiration. Secondly, Athene prays to Poseidon at the feast, praying that: "Telemachus and I may successfully accomplish the task that brings us here" This shows that she wants Telemachus to be bold and fulfil his purpose. His knew found confidence manifests itself when, inspired by Athene, he is courageous enough to make a 'spirited reply' to Nestor's questions and ask about Odysseus. Athene also aids Telemachus in returning home to Ithaca undetected as the suitors were waiting to ambush his ship. Telemachus is also aided by Peisistratus (Nestor's son) who accompanied him on his journey to Sparta. ...read more.

And they will very soon destroy me too" However, we are also made aware of what he has gone through and suffered in his life. For example, he has had to grow up without a strong male role model and now is plagued by suitors to his mother behaving raucously and rudely in his father's palace: "The Suitors came swaggering in" To conclude, Telemachus is sent on his travels to learn about his father in order to build up his Kleos. He must sever the apron strings, which tie him to his childlike life with his overly emotional mother. He needs to learn about being a hero and polite etiquette in the company of gods or heroic men. He must prepare himself for the imminent arrival of his father, which is delayed by Homer whilst Telemachus becomes a son resembling his father in ways other than physically. He gains a role model in characters such as Menelaus and a positive attitude that comes from reassuring words from him and confidence from Athene. Telemachus discovers the last known whereabouts of his father, is given hope that he could still be alive and learns that his father was indeed a hero with many important friends. We feel sorry for Telemachus' difficult childhood, and yet think that he needs to become a stronger, more confident character, that his father can be proud of. Felicity Cohen L6ELL Classical Civilisations Essay ...read more.