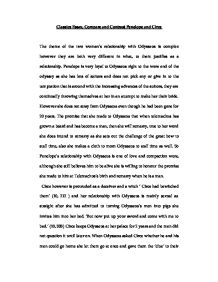 Classics Essay, Compare and Contrast Penelope and Circe The theme of the two woman's relationship with Odysseus is complex however they are both very different in what, to them justifies as a relationship. Penelope is very loyal to Odysseus right to the were end of the odyssey as she has lots of suitors and does not pick any or give in to the temptation that is around with the increasing advances of the suitors, they are continually throwing themselves at her in an attempt to make her their bride. However she does not stray from Odysseus even though he had been gone for 20 years. The promise that she made to Odysseus that when telemachus has grown a beard and has become a man, then she will remarry, true to her word she does intend to remarry as she sets out the challenge of the great bow to stall time, also she makes a cloth to morn Odysseus to stall time as well. So Penelope's relationship with Odysseus is one of love and compaction were, although she still believes him to be alive she is willing to honour the promise she made to him at Telemachus's birth and remarry when he is a man. ...read more.

Circe may not be the driving force that Penelope is but she certainly helped him on his quest, even if she did hinder him by keeping him at her palace as well. Do you see evidence of other men as well as Odysseus? In both cases there is no evidence for the two women, Circe and Penelope actually being with another man. Circe's main role is in book 10 and there is no reference or text suggesting that there is another man as well as Odysseus however there is defiantly the animals that she had turned from men into their animal like state as she had turned Odysseus's men into pigs however she only slept with Odysseus because he was immune to her powers and Hermes the trickster god had said that she had to. So I don't think that she had actually slept with the men that she had turned into animals because they were obviously not immune like Odysseus was. Penelope was also surrounded by men however they were not animals, how ever much they behaved like one, again there is no evidence in the text or in the references that she was unfaithful to Odysseus in any way. ...read more.

In this way Penelope and Circe are quite similar however Penelope uses wit whereas Circe uses magic to deceive people. Fate made by the Gods Both of the women are visited by the gods, Penelope has visits from the Goddess Athena, she makes Penelope appear more beautiful towards the Achaeans 'the great goddess then endouded her with immortal gifts, to make the Achaeans marvel at her beauty' (18, 190) Athena then goes on to make her more beautiful when she was asleep so that Penelope would not know that it was a goddess doing the 'meddling' and think that she was just having a nice dream. Whereas Circe's fate with the gods it much more upfront as she is herself a goddess. In book 10 Hermes appears to both Odysseus and Circe and tells them how to react and what to do when them met each other for the first time 'the Giant killer with the golden wand always told me to expect you' (10, 131) this shows that Hermes has been meddling with their fate and he has basically told them to sleep together. Circe's fate and meeting with the gods is much more upfront as she is one herself whereas Penelope's meeting is much more secretive because unlike Circe she is not a goddess herself. ...read more.