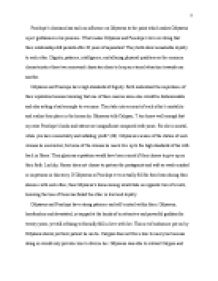 Describe the Love of Penelope and Odysseus

﻿Penelope?s charisma has such an influence on Odysseus to the point which makes Odysseus reject goddesses in his presence. What makes Odysseus and Penelope?s love so strong that their relationship still persists after 20 years of separation? They both show remarkable loyalty to each other. Dignity, patience, intelligence, and alluring physical qualities are the common characteristics these two renowned characters share to keep an eternal attraction towards one another. Odysseus and Penelope have high standards of dignity. Both understand the importance of their reputation because knowing that one of them marries some else would be dishonourable and also setting a bad example to everyone. They take into account of each other?s mortality and realize their place in the hierarchy. Odysseus tells Calypso, ?I too know well enough that my wise Penelope?s looks and stature are insignificant compared with yours. For she is mortal, while you have immortality and unfading youth? (68). Odysseus is aware of the stature of each woman he encounters; but none of the woman he meets live up to the high standards of his wife back in Ithaca. ...read more.

She cries to herself in her private quarters and mourns the disappearance of her husband reminiscently. She does not easily allow the suitors to have their way with her. Penelope is a tenacious woman who believes her husband will one day come back. The long period of time when they are separated from one another are moments when both appear disconsolate and anxious, thus proving that they should be together. The most apparent trait this couple presents is their sense of cleverness and intelligence. Odysseus has the defining traits of a true leader: strength, courage, nobility, a thirst for glory, and confidence in his authority. His most distinguishing trait, however, is his sharp intellect. Odysseus is already known as this hero with extraordinary stratagems shown through the Trojan Wars. ?Telemachus says ?You are held to be the best man in the world for stratagems; no one else can compare with you?? (304). It is his greatest strength and it is what has kept him alive on his journey back to from Troy. ...read more.

Numerous quotes shown through the epic describe Odysseus as tall, broad, and handsome and few people can deny these qualities. Likewise, Penelope attracts the suitors not just for all the power she holds, but plainly for her looks. "The goddess shed grace and beauty over her that all the Achaeans might admire her. [?]; she made her taller and of a more commanding figure, while as for her complexion it was whiter than sawn ivory." (244). It is obvious that she is majestic and breathtaking in many ways. Homer?s description of Odysseus and Penelope clearly displays the close connection that the two of them possess. It is not easy to still maintain faith in someone who has been disconnected for such a long time, but these two prove themselves to be a true fit for each other. Through all the challenges they have faced to them to evaluate their devotion in each other, they conquer the difficulty. A conscious sense of mind and a combination of patience; dignity; cleverness, and beautiful physical features are what make the affair between the two stay alive. They have more commonalities than differences and most readers can agree they are a perfect match. ...read more.