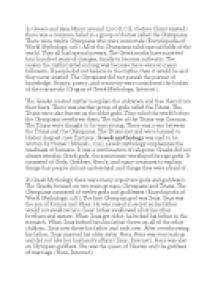 ﻿In Greece and Asia Minor around 1200 B.C.E. (before Christ existed) there was a common belief in a group of deities called the Olympians. There were twelve Olympians who were immortals (Encyclopedia of World Mythology, 128). All of the Olympians ruled special fields of the world. They all had special powers. The Greek myths have survived four hundred years of changes, finally to become authentic. The reason the myths lasted so long was because there were so many followers. If people did not believe in the myths, then it would be as if they never existed. The Olympians did not punish the pursuit of knowledge. Beauty, poetry, and creativity were considered the bodies of the immortals (Origins of Greek Mythology, Internet). The Greeks created myths to explain the unknown and free them from their fears. There was another group of gods called the Titans. The Titans were also known as the elder gods. They ruled the world before the Olympians overthrew them. The ruler of the Titans was Coronus. The Titans were thought to be very strong. There was a war between the Titans and the Olympians. The Titans lost and were banned to Hades? deepest cave Tartarus. Greek mythology was said to be written by Homer (Mcleish, 229). Greek mythology emphasizes the weakness of humans. It was a combination of religions. Greeks did not always worship Greek gods, the sometimes-worshiped foreign gods. It consisted of Gods, Goddess, Hero?s, and many creatures to explain things that people did not understand and things they were afraid of. In Greek Mythology there were many important gods and goddess?s. The Greeks focused on two main groups, Olympians and Titans. The Olympians consisted of twelve gods and goddesses (Encyclopedia of World Mythology, 128). The first Olympian god was Zeus. Zeus was the son of Kronos and Rhea. He was raised in secret so his father would not swallow him. ...read more.

He told Peruses to get the head of Medusa. Peruses agreed to the plan. Peruses successfully captured the head of Medusa and gave it to Polydect. Medusa was the eldest of three gorgons. She was known as the ruler. She was a terrible monster who was once beautiful and cherished her hair. The goddess Athena deprived her of her charms and turned her beautiful hair into hissing serpents. She then became very cruel. Anything that looked at Medusa would turn to stone (Medusa, Internet). The god Bellerophon was honored by the gods when he was young. He was the son of Eurynome. He wanted to capture the horse Pegasus. He was able to bridle and ride Pegasus where the horse grazed. He went to king Pittheus and received permission to marry his daughter. Before the marriage Bellerophon accidentally killed one of his brothers and was banished. The king?s wife accused Bellerophon of trying to seduce her. Proetus wanted to get rid of Bellerophon without telling everyone why. He sent Bellerophon to deliver a message to his wife?s father, king Iobates. Bellerophon was welcomed into Iobates house as a guest. The message he brought to Iobated explained about his daughter and Bellerophon. Iobates was disturbed and his solution was to tell Bellerophon to perform a series of heroic but deadly tasks. Bellerophon completed all of the tasks. Iobates made amends by giving Bellerophon half of his kingdom and his daughter to marry. Bellerophon decided to ride Pegasus to Mount Olympus. Seus put an end to his trip by having Pegasus stung and Bellerophon flew off. He was not crippled by the fall but had to spend the rest of his life on earth. Bellerophon died alone on earth (Bellerophon, Internet). Hercules who was a mortal but became a god upon his death was known to be very strong. He was stronger as a mortal was than most gods were. ...read more.

The underworld has four great rivers; Styx (hateful), Cocytus (waiting for the dead), Acheron (pain), and Pyriphlegethon (burning with the pyre). There is a fifth river, Lethe that is associated with re-incarnation. The Underworld of Greek mythology is like Christians Hell (Evslin, 100). Greek Mythology consists of many stories of the lives of mortals and immortals. There are gods and goddess for almost every aspect of life. The Greeks believed in the gods and goddess and everything they did. Mythology was a way to explain the everyday battles of life. The gods displayed a since of normality making mythology so easy to follow and believe in. In Greek mythology they did things that people today would never think of doing like marrying their sister or brother. Incest was a very common thing in Greek Mythology. The Greeks needed something to believe in and that is how the gods and goddess came to be. If people did not believe in them, then the stories would never even exist. No one can say for a fact if the stories of Greek Mythology ever happened. The only thing that can be said is that back in 800 B.C. people believed in the stories and the gods. When Greek Mythology is looked at closely it almost mimics life of the world today. People still have greed, hate, and envy. People still feel love. Nothing will ever change mythology because in two thousand years people will tell stories about the generations of the 21st century and think it is different from their lives, but relate to the stories at the same time. Greek Myhology is not the only kind of Mythology there is also Roman and Egyptian Mythology. In the ear of 800 B.C. nearly every culture had a sort of Mythology. The gods and goddess in every culture were a reason for life. They explained how life came to be. There were many creation myths about how the world was created. Many people believe different myths. ...read more.