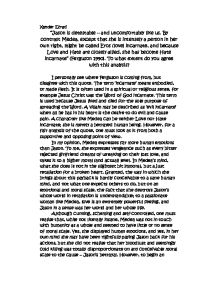 &quot;Jason is detestable - and uncomfortably like us. By contrast Medea, except that she is intensely a person in her own right, might be called Eros (love) incarnate, and because Love and Hate are closely allied, she has become Hate incarnate&quot;

Xander Ezrati "Jason is detestable - and uncomfortably like us. By contrast Medea, except that she is intensely a person in her own right, might be called Eros (love) incarnate, and because Love and Hate are closely allied, she has become Hate incarnate" (Ferguson 1990). To what extent do you agree with this analysis? I personally see where Ferguson is coming from, but disagree with this quote. The term 'incarnate' means embodied, or made flesh. It is often used in a spiritual or religious sense, for example Jesus Christ was the Word of God incarnate. This term is used because Jesus lived and died for the sole purpose of spreading the Word. A villain may be described as 'evil incarnate' when all he has in his heart is the desire to do evil and cause pain. A character like Medea can be neither Love nor Hate incarnate; she is merely a betrayed human being. However, for a fair analysis of the quote, one must look at it from both a supportive and opposing point of view. In my opinion, Medea expresses far more human emotions than Jason. To me, she expresses vengeance such as every bitter rejected girlfriend dreams of wreaking on their lost love, and takes it to a higher moral (and actual) ...read more.

At the end of her rousing speech, she slips in the desire to wreak vengeance on Jason, and due to her cunning, they agree to let her. "A woman's weak and timid in most matters...But touch her right in marriage and there's no bloodier spirit." Creon, King of Corinth and father of Jason's new bride, then approaches Medea with hostility, and orders her immediate banishment from the city. At first he doesn't even recognise Jason's wrongdoing, but treats her as a mindless enemy of the city, a being made of vengeance and hate alone. Medea responds to this woefully and pitiably, more out of cunning than genuine hurt. When she hears that Creon fears her she is surprised and humbles herself, asking why such a powerful and clever man as he should fear a mere woman. She flatters him in an attempt to soften him up. "I will bear my wrongs in silence, yielding to superior strength." At this point, Creon is set on banishing her, and intelligently says that "A woman of hot temper...Is a less dangerous enemy than one quiet and clever." Seeing that he will not change his mind, Medea humbles herself completely and begs the noble King to stay, in an emotional stichomythia. ...read more.

He claims to know Medea's rage, and by this time the word of her bitterness and gall is probably spread throughout the city, but yet, blinded by his own pretensions, misogyny and affecting the controlling, moral and fair male, he completely underestimates her, and merely adds fuel to Medea's wrathful fire. He also ignorantly believes that the reason Medea is so upset and intent on revenge is due to 'mere sex-jealousy', and even goes as far as to say that all women really care about is sex. "...if all's well with your sex-life, you've everything you wish for; but when that goes wrong, at once all that is best and noblest turns to gall." Of course, the malicious and gory murders of both the King and his daughter, and Medea's own children are not on any conceivable moral scale just revenge for Jason's crimes, well, to us anyway. But if your heart works like Medea, and the only love and life that you knew is robbed from you, any wicked deed seems a fair price to take away his smile."the fiercest anger of all, the most incurable, is that which rages in the place of dearest love." "He mistakes her for someone who can be thanked nicely and paid off. She mistook him for a hero." - Prof. Jasper Griffin, Professor of Classical Literature ...read more.