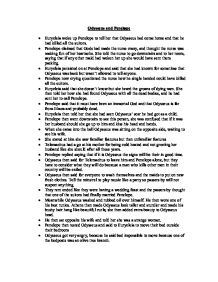 Odysseus and Penelope * Eurycleia woke up Penelope to tell her that Odysseus had come home and that he had killed all the suitors. * Penelope claimed that Gods had made the nurse crazy, and thought the nurse was making fun of her heartache. She told the nurse to go downstairs and to her room, saying that if any other maid had woken her up she would have sent them packing. * Eurycleia persisted on at Penelope and said that she had known for sometime that Odysseus was back but wasn't allowed to tell anyone. * Penelope now crying questioned the nurse how he single handed could have killed all the suitors. ...read more.

* Penelope replied saying that if it is Odysseus the signs will be their in good time. * Odysseus then said for Telemachus to leave him and Penelope alone, but they have to consider what they will do because a man who kills other men in their country will be exiled. * Odysseus then said for everyone to wash themselves and the maids to put on new fresh clothes. Tell the minstrel to play music like a party so passers by will not suspect anything. * They rent ended like they were having a wedding feast and the passers by thought that one of the suitors had finally married Penelope. * Meanwhile Odysseus washed and rubbed oil over himself. ...read more.

* Odysseus replied by telling her that he has to wander from city to city (carrying an oar) until comes to people who do not know about the sea. , and when a traveller asks him about winnowing fans (oars). He must then sacrifice a ram, a bull and a breeding boar. He can then return home and make sacrifices. This will then ensure he lives his life to old age with no troubles. * Eyrnome then finished making the bed. They went to sleep and made love after Odysseus told Penelope of his travels. * Telemachus, cowherd, swineherd stopped dancing and went to sleep. * In the morning Odysseus with the Telemachus, cowherd, and swineherd went to see Odysseus' father in the Orchard farm. He told Penelope to stay with the ladies in waiting in the women's quarters because it would be common knowledge that he killed all the suitors. ...read more.