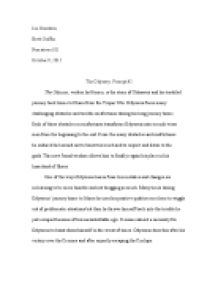 Odysseus becomes a much wiser man throughout his epic journey

﻿Joe Goodwin Brett Griffin Narratives 101 October 9, 2012 The Odyssey- Prompt #2 The Odyssey, written by Homer, is the story of Odysseus and his troubled journey back home to Ithaca from the Trojan War. Odysseus faces many challenging obstacles and terrible misfortunes during his long journey home. Each of these obstacles or misfortunes transforms Odysseus into a much wiser man from the beginning to the end. From the many obstacles and misfortunes he endured he learned not to boast too much and to respect and listen to the gods. This new found wisdom allows him to finally regain his place in his homeland of Ithaca. One of the ways Odysseus learns from his mistakes and changes are in learning to be more humble and not bragging as much. Many times during Odysseus? journey home to Ithaca he uses his positive qualities as a hero to wiggle out of problematic situations but then he throws himself back into the trouble he just escaped because of his uncontrollable ego. It seems almost a necessity for Odysseus to boast about himself in the worst of times. Odysseus does this after his victory over the Cicones and after expertly escaping the Cyclops. After Odysseus begins his journey home to Ithaca from Troy he and his men attack the land of the Cicones. Instead of leaving the land after their victory, Odysseus? men convince him to stay and celebrate because they are starved. The Cicones rally a force together and attack Odysseus and his men. ...read more.

He does not boast of his conquests on his journey home. Instead he does not tell anyone that he is in fact Odysseus. This helps him ultimately kill the suitors and rescue his house and his family. Odysseus? change in character from the beginning of the epic, when he would boast of his greatness without thinking of the ramifications, to the end of the epic, when he controls himself and expertly executes a plan to rescue his house, causes him to learn that his pride is hurtful to his goals in life. This change in character is one of the most important throughout the epic. Another way Odysseus changes his character to become a better hero and help him reach his home of Ithaca is to pay close attention to the instructions of the gods, or he would have to pay a terrible price. He and his men do not heed the warnings of the gods a few times and these incidents cause major problems for the forward progress of their trip home. These times are when Odysseus receives the bag of winds from Aeolus and when Odysseus and his men land on the island of Hyperion and his men kill the cattle. Odysseus and his men land at the island of Aeolus, the god of the winds. Odysseus and his men are given a parting gift, a gift that would have benefited them greatly if they would have listened to the warnings of Aeolus. Aeolus granted Odysseus with a bag filled with the bad winds that would keep Odysseus and his men from their home of Ithaca; Aeolus only leaves out the west wind, the wind that will push the ship towards Ithaca. ...read more.

From his encounters on the island of the Cicones, and with Polyphemus, Odysseus learns that his boasting and bragging can be very malicious to his cause and create avoidable obstacles on his road to Ithaca. On Ithaca Odysseus never boasts to the suitors and is able to come into his own house without the suitors being aware of his true identity. Odysseus takes the cruel punishment of Antinous and the others without revealing his identity and observes the suitors who have invaded his house. Odysseus is able to identify who is loyal and who is not and take his revenge on the suitors without them ever knowing who he is until the final moment. Odysseus also learns to respect and listen carefully to the gods. When he lands on Aeaea, the island of Circe, he follows the instructions of Hermes so that he can conquer Circe and free all of his men. Odysseus very carefully follows the instructions Circe gave him by entering and exiting the Underworld without any misfortune and putting wax in all of the ears of his men to make it past the Sirens safely. Odysseus becomes a much wiser man throughout his epic journey and is able to ultimately return safely back to his homeland of Ithaca to restore his name and rescue his household. Throughout Odysseus? wanderings from Troy to Ithaca, Odysseus transforms into a humbler and more respectful man. The once majorly boastful Odysseus learns that his bragging can turn many people against him, and becomes a quieter man than he was when he left Troy. ...read more.