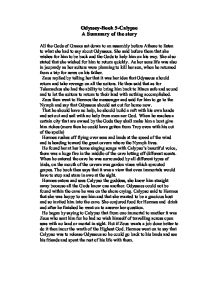 Odyssey-Book 5-Calypso - A Summary of the story.

Odyssey-Book 5-Calypso A Summary of the story All the Gods of Greece sat down to an assembly before Athene to listen to what she had to say about Odysseus. She said before them that she wishes for him to be back and the Gods to help him on his way. She also stated that she wished for him to return quickly. As her sons life was also in jeopardy as her suitors were planning to kill her son, when he returned from a trip for news on his father. Zeus replied by telling her that it was her idea that Odysseus should return and take revenge on all the suitors. He then said that as for Telemachus she had the ability to bring him back to Ithaca safe and sound and to let the suitors to return to their land with nothing accomplished. Zeus then went to Hermes the messenger and said for him to go to the Nymph and say that Odysseus should set out for home now. That he should have no help, he should build a raft with his own hands and set out and sail with no help from men nor God. ...read more.

How she was willing to share with him immortality and agelessness. She then went on into other Gods who lost loved ones and were not happy and it was through jealousy that the things happened. She then said 'Good Riddance to Him' she refused to give him a boat and crew as none were available but she did promise to give him directions of how to get to his lands safely. She went over to Odysseus and said to him that she was going to help him get of the island. She said he shouldn't grieve much anymore as she was ready to help him. She told him to cut trees down make a raft and she would stock it with food and wine and clothes and give a wind to help him. Odysseus said that he didn't trust her, that she was not thinking of his safety but something else (his death). To this she made a promise, a Gods promise that she wished for no such thing to happen and that she was being sincere. She and Odysseus went into the cavern after and sat down to a meal. After Calypso said that he was determined to go and see his 'Beloved Ithaca' she then tries to turn him off going without making obvious. ...read more.

Why is it that Poseidon has a grudge against you, trying to kill you? Though he shall not succeed while I am watching over you. With that he returned to his boat with the help and pity of Cadmus. She gave him ma veil and said to cast it out over the sea and walk in safety to the land in the distance. Odysseus snared at this and carried on in the boat across the sea with is will as his strength. Poseidon then sent another wave which knocked him off again so he put on the veil and swam for it. Poseidon decided to give up and let him go. So Athene the daughter of Zeus laid the seas to rest and so Odysseus could go to the lands of the Phaecians. When he landed on the island he was overjoyed. But a Wave threatened to make him crash into rocks until he grabbed a rock and prevented it, it was only the back wave that caught him and sent him far into the sea again. He prayed to the gods for mercy and help and with that the currents of the rivers stopped and made it easy for Odysseus to swim to the land and climb onto land. Odysseus found shelter and made a bed he was very thankful for it as he hadn't had a proper bed in weeks. ...read more.