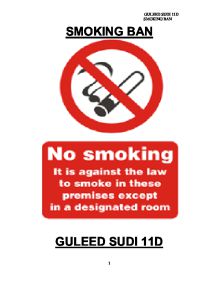 SMOKING BAN GULEED SUDI 11D CONTENTS PAGE: * Introduction: 3 * Scientific background: 4 * For and Against: 16 * Comparing For and Against: 19 * Conclusion: 22 * Bibliography: 23 INTRODUCTION For my GSCE science coursework I have been assigned to study a scientific question in detail. The question I have chosen to study is "Should there be a smoking ban?" and the reason I have chosen this question is because it is a very contemporary topic which will affect more or less everybody in the UK. The smoking ban will be introduced on the 1st of July 2007 and smoking will be unlawful in public and enclosed work places forward of this date. The smoking ban has been made to ensure that there is the least possible passive smoke (passive smoke is just other peoples smoke and is also known as second-hand smoke.) "Definition of a reliable source: Reliable sources are authors or publications regarded as trustworthy or authoritative in relation to the subject at hand. Reliable publications are those with an established structure for fact-checking and editorial oversight. The reliability of a source depends on the context: a world-renowned mathematician is not a reliable source about biology. In general, an article should use the most reliable and appropriate published sources to cover all majority and significant-minority published views." (http://en.wikipedia.org/wiki/Wikipedia:Reliable_sources) SCIENTIFIC BACKGROUND - What is in a cigarette? ((http://www.nysmokefree.com/newweb/pageview.aspx?p=4020) this diagram is more likely to be reliable because the diagram comes from a website that has to do greatly with smoking. Cigarettes contain many ingredients which makes it very addictive and satisfying. These ingredients include: Nicotine - is found in tobacco and is very addictive. Nicotine is delivered to a smoker's lung in the form of mixed smoke particles and gas. The nicotine is then rapidly absorbed into the blood and reaches the brain within about 10 seconds. At this point the smoker experiences a nicotine "hit" - this is when the receptors in the brain produce chemicals called dopamines. ...read more.

The provision of ventilation to such rooms will not be a defense. According to the Scottish Executive, while ventilation removes the smell and sight of smoke from the room, it does not remove the toxic carcinogens. The ban will also extend to cover vehicles used for business purposes. Individuals using their private or company car for business purposes will, however, be exempt. Residential accommodation, adult hospices and designated rooms in certain premises such as hotels, adult care homes and offshore installations are also exempt from the rules. Local Environmental Health Officers (EHOs) will enforce the rules and will also work with businesses to help them in complying with the law. Employers or managers of no-smoking premises will be liable to a fine of �200 if they are found to be breaching the rules, while individuals found smoking in no-smoking premises face a fine of �50. - http://www.out-law.com/page-6323 This information is reliable as it from an article all about the smoking ban and also this article was updated recently. - What other countries will have the smoking ban? Many countries have enforced a smoking ban including Albania, Argentina, Australia, Belgium, Bhutan, Canada, Czech Republic, Denmark, Estonia, Finland, France, Guernsey, Hong Kong, Hungary, Iceland, Ireland, Isle of Man, Italy, Jersey, Lithuania, Malta, Netherlands, New Zealand, Norway, Portugal, Puerto Rico, Singapore, Sweden, Switzerland, England, Scotland, Northern Ireland, Wales, USA, Uruguay all have also introduced some kind of smoking ban activity. The only country in the world to have banned the sale and smoking of tobacco is Bhutan. (http://en.wikipedia.org/wiki/Smoking_ban#Smoking_bans_by_country) - This information is reliable as it comes from a well known website and also this information comes from an article all about the smoking ban. However, it can be unreliable as it is open to the public to change and edit its information. - What do people think about the smoking ban? The smoking ban has brought in different views for or against the ban. ...read more.

Not only do smokers argue against the ban but also some businesses may argue against the ban. Businesses such as pubs and bars may suffer from customer loss as some customers who smoke may not visit smoke free pubs and bars. This will result in income loss for businesses and may also result in the closure of businesses. Licensed Victuallers Wales say that the smoking ban could lead to a closure of more than a quarter of pubs in Wales which could be the same in England. Not only would businesses such as pubs and bars suffer from the smoking ban, but also cigarette companies-which will probably suffer the most. As I mentioned earlier that 15% of smokers say they will quit if a smoking ban was introduced. This will result in customer loss for cigarette companies as they will lose customers. Not only will this loss affect cigarette companies, but also cigarette companies may have a decrease in sales of cigarettes as people may need fewer cigarettes if the smoking ban is put in effect. Having examined all the evidence available including Human Rights and that passive smoking causes many diseases, I have come to the conclusion that I agree with the smoking ban because it is only right that people can avoid second hand smoke if they do not want it, and the government will lose less money due to less diseases from passive smoking. Some people might, however, disagree with me because they have views like it is a Human Right that people can smoke if they wish and also businesses could disagree with me because they will loose out. I think that we should make it unlawful to smoke in all public sectors, however, private smoking sectors be made because I think it is unfair to punish people because they have developed the habit, but its equally important that non-smokers can avoid smoke. I think the smoking ban will result in the decrease in the number of smokers in the UK which is better for the whole populations. ...read more.