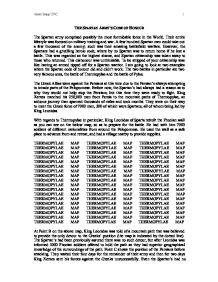 THE SPARTAN ARMY'S CODE OF HONOUR The Spartan army comprised possibly the most formidable force in the World. Their entire lifestyle was focused on military training and war. A few hundred Spartan men could take out a few thousand of the enemy; such was their amazing battlefield warfare. However, the Spartans had a gruelling heroic code, where by no Spartan was to return home if he lost a battle. This was regarded as the highest shame, and Spartan citizenship was taken away to those who returned. This dishonour was unthinkable. To be stripped of your citizenship was like having an armed ripped off for a Spartan warrior. I am going to look at two examples where the Spartan code of honour did and didn't work. The two battles in particular are two very famous ones, the battle of Thermopylae and the battle of Pylos. The Greek Allies were against the Persians at this time due to the Persian's always attempting to invade parts of the Peloponnese. Before now, the Spartan's had always had a reason as to why they would not help stop the Persians, but this time they were ready to fight. King Xerxes marched his 250,000 men from Persia to the mountain paths of Thermopylae, an arduous journey than spanned thousands of miles and took months. They were on their way to meet the Greek force of 7000 men, 300 of which were Spartans, all of whom being led by King Leonidas. ...read more.

AND MAP C MAP B AND MAP C MAP B AND MAP C MAP B AND MAP C MAP B AND MAP C Two examples of the Spartan fighting methods, two different outcomes. Those who died at Thermopylae would have gone down in history as brave men, who showed complete honour and dignity, dying in fervour for their motherland. However, under normal circumstances, those who surrendered at Pylos would have gone back to Sparta only to have their citizenship rebuked. But, the state of the Spartan army without the men who fought at Pylos would've been quite catastrophic, and the numbers would have decreased enormously, so their citizenship was not taken away. They would become outcasts and their shame would be cast upon their families. Was this ridiculous code fair? Surely, if a man had no way out and had to surrender then he should be able to, keeping his life yet not losing his honour. Evidentially, this was not the case for the most formidable fighting force in the world. For Sparta, it was win or die. Were there any alternatives for the Pylos soldiers though? Should they have let themselves die in zest for their country, or did they do the right thing, saving themselves so that they could see their loved ones just once more. All that can be said is that due to the arduous code of honour the Spartans austerely enforced, they wiped themselves out. However, this did not happen till later on in history. Adam Sopp UVC 1 ...read more.