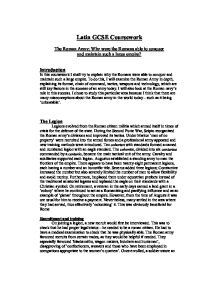 The Roman Army: Why were the Romans able to conquer and maintain such a large empire?

Latin GCSE Coursework The Roman Army: Why were the Romans able to conquer and maintain such a large empire? Introduction In this coursework I shall try to explain why the Romans were able to conquer and maintain such a large empire. To do this, I will examine the Roman Army in depth, explaining its format, chain of command, tactics, weapons and technology, which are still key factors in the success of an army today. I will also look at the Roman navy's role in this success. I chose to study this particular area because I think that there are many misconceptions about the Roman army in the world today - such as it being 'unbeatable'. The Legion Legions evolved from the Roman citizen militia which armed itself in times of crisis for the defence of the state. During the Second Punic War, Scipio reorganized the Roman army's divisions and improved its tactics. Under Marius 'men of no property' were recruited into the armed forces and a professional army appeared and new training methods were introduced. Ten cohortes with standards formed a named and numbered legion with an eagle standard. The cohortes, divided into six centuriae commanded by a centurio, became the main tactical unit of the army. Cavalry and auxiliaries supported each legion. Augustus established a standing army to man the frontiers of the empire. There appears to have been twenty-eight permanent legions, each having a number and an honorific title. Severus added three legions; Constantine increased the number but also severely limited the number of men to allow flexibility and avoid mutiny. Furthermore, he placed them under equestrian prefects instead of the traditional senatorial legates and replaced the eagle on their standards with a Christian symbol. On retirement, a veteran in the early days earned a land grant in a 'colony' where he continued to act as a Romanizing and pacifying influence and as an example of 'pietas' throughout the empire. ...read more.

The design of the fortress was based on a standard pattern. The main buildings, grouped in the centre, were the headquarters (principis), the living-quarters of the legatus (praetorium), the hospital (valetudinarium) and the granaries (horrea). The fortress was surrounded by a ditch, rampart and battlements with towers at the corners and at regular intervals along the sides. Each side had a fortified gateway. The principia was the heart of the legionary fortress and was therefore large, complex and impressive. It had a stone-flagged courtyard which was surrounded by a colonnade and storerooms. The basilica was the great hall where the commander worked with his officers, interviewed important locals and administered military justice. It was very large, being about 75m long and 24m wide. Its central nave, bounded by tall columns supporting the vaulted roof, was about 12m wide and the aisles on either side were about 6m wide. If each man stood shoulder to shoulder, it would have been possible to squeeze the whole legion into it. All this helped to impress the local rulers. In the centre of the far wall of the basilica was the most sacred place in the fortress: the saecellum or chapel. This housed the legion's standard, the aquila, an image of an eagle perched with outspread wings on the top of the pole. It was made of gold and in its talons it clutched a bundle of golden darts, representing Jupiter's thunderbolts. The aquila represented the 'spirit of the legion' and aroused feelings of intense loyalty and almost religious respect. Too lose it in battle was the worst possible disgrace and misfortune - it rarely happened. The soldier who looked after the aquila was always from the first cohort and carried it into battle. On either side of the saecellum were the rooms where the clerks kept the payrolls and attended to all the paperwork that was needed to run the legion. ...read more.

They were also the nearest Rome had to an official police force. Augustus established nine cohortes of about 500 each of these veterans, in and around Rome, later putting two prefects in command. This was expanded to twelve cohortes by Caligula and then to sixteen by Vitellius until the number of cohortes was fixed at ten towards the end of the 1st Century. It was consolidated as an elite corps: they were better paid than legionaries, served shorter engagements and had many privileges. Its prefects were often influential in political intrigue and imperial succession (at least four prefects became emperor). However, it was disbanded by Constantine in 312 AD. Conclusion The success of the Roman army was largely due to its discipline, its tactics and above all its versatility. The Roman legions were based on a clearly defined chain of command and a squad-based system. If isolated, a legionary would be vulnerable and dependant on his immediate surroundings for food. However, each legion (or even cohors) was relatively mobile, heavily protected and able to produce its own food, weapons and armour. A legion was very versatile, being able to build roads, forts, artillery and defences. This was one of the first instances where the army was used for activities other than fighting, occupying or controlling. This meant experienced troops could be retained, and soldiers could be given more training without it being uneconomical. The Roman army was dependant on discipline, technology and training, as are the leading armed forces today. This shows us that though the roman legion wouldn't be practical today, many of its ideals would be. Evaluation In this coursework I have explained how the Roman army became to be so successful. Most of my research on the auxiliaries, siege engines and the praetorian guard was knew to me, so I found these topics especially interesting. I am also quite surprised at the similarities in military ideology between then and now. I was unable to go on to the navy (though I did research this and found it interesting) due to lack of space. ...read more.