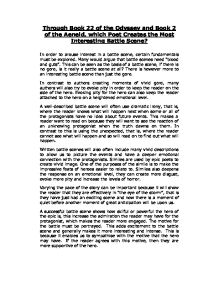 Through book 2 of the aeneid and book 22 of the odyssey, which author creates the more interesting battle scene

Through Book 22 of the Odyssey and Book 2 of the Aeneid, which Poet Creates the Most Interesting Battle Scene? In order to arouse interest in a battle scene, certain fundamentals must be explored. Many would argue that battle scenes need "blood and guts". This can be seen as the basis of a battle scene, if there is no gore, is it really a battle scene at all? There is however more to an interesting battle scene than just the gore. In contrast to authors creating moments of vivid gore, many authors will also try to evoke pity in order to keep the reader on the side of the hero. Evoking pity for the hero can also keep the reader attached to the hero on a heightened emotional level. A well-described battle scene will often use dramatic irony, that is, where the reader knows what will happen next when some or all of the protagonists have no idea about future events. This makes a reader want to read on because they will want to see the reaction of an unknowing protagonist when the truth dawns on them. In contrast to this is using the unexpected, that is, where the reader cannot see what will happen and so will read on to find out what will happen. Written battle scenes will also often include many vivid descriptions to allow us to picture the events and have a deeper emotional connection with the protagonists. Similes are used by epic poets to create vivid image. One of the purposes of the simile is to make the impressive feats of heroes easier to relate to. Similes also deepens the response on an emotional level, they can create more disgust, evoke more pity and increase the levels of horror. ...read more.

The reader therefore knows that the horse will be the downfall of Troy. In the Odyssey, the suitors have no idea who Odysseus is even when told, they still believe he is "just a beggar". The reader knows that this is not the case because the reader has followed Odysseus on his quest to return to Ithaca. The suitors then presuppose that Odysseus killing Antinous was an accident, "each of them had laboured under the delusion that it had been an accident". The reader clearly knows that Odysseus shooting Antinous was no accident because we know that Odysseus is Odysseus. The suitors being under the "delusion" that it was an accident also implies stupidity on their part, almost as if they are just imagining Odysseus being a beggar who could not deliberately shoot a man. Due to the way in which Odysseus is has control over the situation and Aeneas does not, the reader will be more emotionally inclined to favour Odysseus, more knowledgeable readers will also know that Aeneas fails in his attempt to save Troy and that Odysseus succeeds in killing the suitors. The natural "glory-hunting" part of the reader will therefore be inclined towards favouring the battle scene in the Odyssey. The ensuing point already noted was the use of similes. This technique is used extensively in both of these epic poems; firstly I shall focus on the Odyssey. The suitors say to Odysseus that for shooting "the greatest nobleman in Ithaca: for that the vultures shall eat you". This implies that the suitors know that they can be compared to vultures, not just for scavenging of a beggar, but also for coveting Penelope and raping Odysseus maids for so long. ...read more.

Examples in the Odyssey can be seen when the suitors are throwing spears at Odysseus and his Company and "Amphimedon succeeded in catching Telemachus on the wrist - a glancing blow, the bronze just grazed the skin". In the same volley "a long spear from Ctesippus, flying over Eumaeus' shield, scratching his shoulder before it passed beyond and fell to the ground". This can be seen as interesting because of the tension built up about whether or not the spears will cause any lasting damage. In the Aeneid, Trojans are throwing spears at people who they think are Greeks when in fact they are Trojans in disguise. This builds up tension in wonder about whether or not Aeneas will be among the wounded or dead, however, if the reader thinks then they will realise that it is Aeneas who is narrating the story and so he cannot be dead. Despite this tension is still built up. Building tension in this way can be used to increase the pace of the passage and so vary the pace in a differing manner from earlier. Due to the way in which tension is still built up despite the reader already knowing that Troy will fall and Aeneas will escape, the battle scene that Virgil creates must greatly appeal to the human subconscious and so this must be a truly great battle scene, In balance, both epics have their high points of interests with few points of less interests, however on balance the Odyssey's battle scene does appeal more to the gore-loving reader, as the Romans and Greeks were. Odysseus' morbid thoughts would appeal more than the pious thought of Aeneas to most readers and so that is why book 22 of the Odyssey has a more interesting battle scene than book 2 of the Aeneid. ...read more.