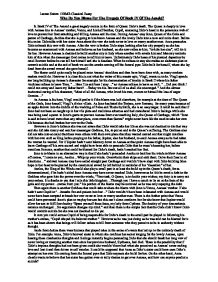 In Book IV of The Aeneid a great tragedy occurs in the form of Queen Dido’s death. The Queen is deeply in love with Aeneas due to Aeneas’ mother, Venus, and his half brother, Cupid, ensnaring Dido’s heart in the poisonous web of love to prevent her from attacking and killing Aeneas and his men. During Aeneas’ stay Juno, Queen of the Gods and patron of Carthage, decides that she is going to lure brave Aeneas and the lovely Dido into a cave and unite them. Before this union Dido talks with her sister Anna about the vow she took never to love or marry another man. Anna persuades Dido to break this vow with Aeneas. After the vow is broken Dido stops looking after her city properly as she has become so enamoured with Aeneas and believes as her husband, as she now refers to him, “to hide her sins”, will do it for her. However Aeneas is destined to build another city in Italy where another wife awaits him and Mercury reminds him of this when the messenger God comes to tell him to leave. Unfortunately Dido hears of his planned departure by cruel Rumour before he can tell her himself and she is desolate. When he refuses to stay she makes an elaborate plan to commit suicide and at the end of book we see the smoke coming off the funeral pyre Dido built for herself, where she lay dead from the sword wound she gave herself.

The blame could quite easily be placed onto Aeneas’ shoulders and then have been done with, as many modern readers would do. However it is clear this is not what the writer of this master epic, Virgil, wants us to do. Virgil spends too long building up Aeneas’s character for example for his demonstration of loyalty in Book II where his father Anchises refuses to leave Troy, “…Here I lie and here I stay…” so Aeneas refuses to leave as well, “…Did you think I could run away and leave my father here? …Today we die. But not all of us shall die unavenged.” And the almost instinctual caring of his character, “Most of all did Aeneas, who loved his men, mourn to himself the loss of eager Orontes…”

As Aeneas is his hero, Virgil would prefer it if the blame was laid elsewhere, for example at the door of The Queen of the Gods, Juno herself, Virgil’s divine villain. As Juno has hated the Trojans, now Romans, for many years because of an apple thrown into the middle of the wedding of Pelos and Thetis by Strife, she is an easy target. It could be said that if Juno had not been so caught up in her vile plots and malicious schemes and had considered Dido’s feelings while she was being used a pawn in Juno’s game to prevent Aeneas from ever reaching Italy, the Queen of Carthage, which “Juno is said to have loved more than any other place, even more than Samos” might never have felt the need to take her own life because she had broken her vow to the Gods.

However in Juno’s defence she was not aware that Dido would take her life as she was not destined to die that way and she did take mercy and sent her messenger Goddess, Iris, to put an end to the Queen’s suffering. The Goddess also did not take into account that there were others with their own plans that they wanted carried out that might interfere with her own such as King Iarbus praying to his father, Jupiter, also her husband, to send Aeneas away as he had taken the woman he wanted. For if Jupiter hadn’t sent Mercury down to Aeneas at that point Aeneas might have been able to leave Carthage off his own accord and might have been able to persuade Dido that he wasn’t deserting her, before merciless Rumour, another that could be blamed for Dido’s death, hadn’t reached her first.

Juno is to blame in an alternative way in that if she hadn’t persuaded Aeolus to lend her his winds to blow Aeneas off course, “I come to you, Aeolus…Whip up your winds. Overwhelm their ships and sink them. Drive their fleet in all directions…” stalwart Aeneas may have sailed straight past Carthage and wouldn’t have slept with Dido building false hope in her heart to be pierced by the ceremonial sword he left behind in reminder of his “desertion” of her.

Aeolus, the King of the Winds could also play a small part in at least the build up to the Queen’s death, for as aforementioned, if he hadn’t aided Juno Aeneas may have never reached Dido, however as he felt he owed a debt to the Goddess who gave him the power over the winds, “Your task, O Queen, is to decide your wishes; my duty is to carry out your orders. It is thanks to you that I rule this little kingdom…Through you I have a couch to lie on at the fests of the gods and my power…comes from you.” his portion of the blame may be removed as he was only repaying the debt.

Then again there is another Goddess that could take or share the blame with Juno is Venus, Aeneas’ mother. If she hadn’t sent Cupid to “…breathe fire and poison into her…” Dido wouldn’t have been infatuated with Aeneas and would never have been tempted to break her vow never to love or marry another man. There is the further point that Venus could have prevented Juno’s plan to waylay her son but this can’t alone condemn her for she knew that Jupiter would allow her son to fulfil her destiny “Spare yourself these fears, my lady from Cythera. The destiny of your descendants remains unchanged…No arguments changes my mind.” and then there is the simple fact that the Gods didn’t know Dido would commit suicide for she was not destined to die yet.

In turn you could accuse Cupid of being responsible for Dido’s death in the small part he played in following his mother’s orders, “Cupid obeyed his beloved mother.”  However as he was just doing as he was told can he blamed for it as it has been shown that beings will follow orders to kill from someone who they perceive to be in authority without thought.

Aside from deities there were humans that played roles in the series of events that led up to the untimely death of Dido. For example Anna, Dido’s beloved sister in whom she confines her secret longing for the lovely Aeneas, upon hearing these clandestine thoughts and feelings instantly begins persuading Dido that she should break her long vow of never loving or marrying another man since her previous husband, Sychaeus, had died. There is the possibility that if Dido’s impious thoughts had not been given credit she wouldn’t have had what she perceived as Aeneas’ never ending love and lost it and then driven to self murder. It could be supposed that Anna as Dido’s sister could have seen Dido’s attempt on her own life coming from the funeral pyre that Dido requests she build for her. On the other hand, Anna clearly wants to believe that her sister has gotten over or truly desires to get over Aeneas, and how can anyone predict a suicide?

Then there is King Iarbus, the selfish, self-obsessed nobility that is born of Jupiter who, with his continual pursuit and dismissal of Dido, had not thrown a temper tantrum and thrown his toys out of the pram like the child he is portrayed as, at having another win the heart of the one he wants for himself and complained to his father, Mercury wouldn’t have been sent to chivvy Aeneas in his departure. His incessant chasing after Dido, and whilst the other Kings pursued her hand also, if they had not been quite so insistent she wouldn’t have felt the need to take her life to spare herself from the scorn she feels they would pour on her for breaking her vow.

The third human who plays a part in Dido’s death is obviously Dido herself, but it is highly debatable whether she is actually to blame for her own death for she does concoct a marriage between her and Aeneas and drives herself mad with her unseemly obsession with him, so much so that she stops building the walls of her city, so when Aeneas does leave her and she realises she has let things slide, in her love soaked madness she perceives that all would hate her and must even then despise her for breaking her vow and as she had taken the oath in front of the Gods and given sacrifice to bind her to the promise she feels she must sacrifice herself to make amends.

Going back further to the wedding of Pelos and Thetis, the death of Queen Dido could be blamed upon Strife for throwing the golden apple of Discord, inscribed with the words “for the fairest” into the midst, the Goddess Minerva, Venus and Juno would never have asked and bribed the fairest human man, Paris, to pick them. For if Paris hadn’t picked Venus and Helen, the war of Troy wouldn’t have happened, Aeneas and the Trojans wouldn’t have needed to flee, Juno might not hate them, and Dido’s heart would never have been broken beyond repair by Aeneas leaving her. Although in Strife’s defence you could blame the other Gods for if they hadn’t been discriminative towards Strife and left her out of the wedding festivities she wouldn’t have felt the need to play her little game.

In conclusion the door of the one person or deity that the blame can be laid at is Juno for it is her selfish drive to wreck revenge on the Trojans for something they didn’t do that ultimately led to the death of Dido, excluding Dido’s choice because the Gods did give the mortals free will. It is unclear whether this is whom Virgil blames but as he portrays Juno as the scoundrel of the epic continuously it is the easiest choice to make.

However if it wasn’t a question of who was to blame for the tragedy of Book IV it would have to be said the thirst for vengeance is what kills Dido for she feels the Kings and the Gods would want to punish her so to avoid said craving for retribution to takes her life to save her honour.