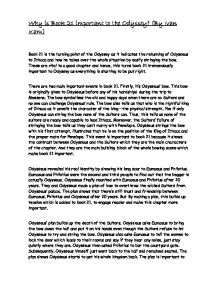 Why is Book 21 important to the Odyssey?

Why is Book 21 important to the Odyssey? (By Ivan Kam) Book 21 is the turning point of the Odyssey as it indicates the returning of Odysseus to Ithaca and how he takes over the whole situation by easily stringing the bow. These are vital to a good chapter and hence, this turns book 21 tremendously important to Odyssey as everything is starting to be put right. There are two main important events in book 21. Firstly, it's Odysseus' bow. This bow is originally given to Odysseus before any of his hardships during the trip to Messene. The bow symbolises the old and happy days when there are no Suitors and no one can challenge Odysseus' rule. The bow also tells us that who is the rightful king of Ithaca as it unveils the character of the king-the physical strength, like if only Odysseus can string the bow none of the Suitors can. Thus, this tells us none of the suitors are ready and capable to lead Ithaca. Moreover, the Suitors' failure of stringing the bow tells us they can't marry with Penelope. ...read more.

He thinks of a spectacular plan which hasn't reveal his real identity but made a path for him to get his palace back at a much easier way. In addition, it also shows us how patient Odysseus is and how he can endure the teasing from the Suitors, because he is confronting with people who fleeced his house for twenty years and made his wife's life bad. Even so, Odysseus still acts as if nothing happens and has conversation with them as a beggar. The plan deliberately brought out the characters of Odysseus as make the story important and dramatic. Dramatic irony is used at this situation because we know that the man who is going to kill the Suitors is the beggar but the Suitors do not realise it and instead insulting him. The contest of Odysseus' bow shows that even though the beggar is old, he could still string the bow with unmatched strength and skill at his age. This is being proved when Homer described Odysseus "Not a single axe did he miss." This shows that Odysseus is skilful even though he took the shot while he was sitting down. ...read more.

This shows he is being assertive and has tallen his responsibility. When his father Odysseus shot the arrow, he took up his weapons and stand by his father side. This shows Telemachus is grown-up as he is brave and is ready to fight the Suitors. The Suitors in book 21 are lead by Antinous. The Suitor laugh when Telemachus asked Eumaeus to bring the down the hall and he says "I maybe young, but I am more powerful than you." The laughter shows the Suitors are rude and have no respect to other people. One of the Suitor's Leodes, he fails to string the bow and is lament is that it's better to die than to live on without winning Penelope that they are hoping for here at Ithaca everyday because it is impossible for the Suitors to string the bow. This shows Leodes is a hypocrite as he can't string the bow. To end with, I think book 21 is important to Odyssey. As details are essential to a successful story which link up everything together like the contrast of the bow, build up the death of the Suitors and most importantly is the characterisation. Consequently, these information shows and proves book 21 is important to the Odyssey. ...read more.