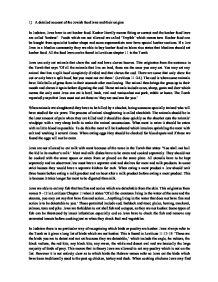 A detailed account of the Jewish food laws and their origins.

1) A detailed account of the Jewish food laws and their origins In Judaism, Jews have to eat kosher food. Kosher literally means fitting or correct and the kosher food laws are called 'kashrut'. Foods which are not allowed are called 'Treyfah' which means torn. Kosher food can be bought from specialist kosher shops and some supermarkets now have special kosher sections. If a Jew lives in a Muslim community they are able to buy kosher food as Islam also states that Muslims should eat kosher food. All the food laws can be found in Leviticus chapter 11 in the Torah. Jews can only eat animals that chew the cud and have cloven hooves. This originates from the sentence in the Torah that says 'Of all the animals that live on land, these are the ones you may eat. You may eat any animal that has a split hoof completely divided and that chews the cud. ...read more.

Meat and milk dishes have to be eaten and cooked separately. They should not be cooked with the same spoon or eaten from or placed on the same plate. All utensils have to be kept separately and an observant Jew must have a separate sink and shelves for meat and milk products. In some strict houses they would have a separate kitchen for each. When eating a meat product a Jew should wait three hours before eating a milk product and an hour after a milk product before eating a meat product. This is because it takes longer for meat to be digested than milk. Jews are able to eat any fish that has fins and scales which are detachable from the skin. This originates from verses 9 -12 in Leviticus Chapter 11when it states 'Of all the creatures living in the water of the seas and the streams, you may eat any that have fins and scales...Anything living in the water that does not have fins and scales is to be detestable to you.' ...read more.

Non-Jews do this as well because most people would not want to eat dirty fruit and vegetables. However, Jews check theirs extremely closely as it is seen as a sin as well as repulsive to eat 'creepy crawlies'. Washing leafy vegetables is common but does not remove all the insects so for example Jews wash their lettuce thoroughly. They then hold it up to the light and look under each fold. All vegetables are checked like this. In case any insects crawl into fruit Jews carefully examine their fruit as well. Some foods in Judaism are considered neutral (pareve). This means that they can be eaten with either meat or milk dishes. However, there are some exceptions as in some Jewish communities fish and meat or fish and milk are eaten together. In some communities they can be served at the same meal on different dishes using separate utensils. Flour is considered pareve when it does not contain dairy additives and some cheeses that contain animal-origin rennet from a non-kosher animal are not allowed in Judaism. ...read more.