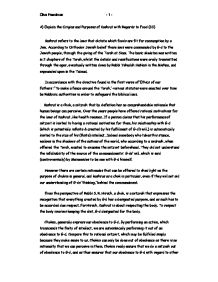 A) Explain the Origins and Purposes of Kashrut with Regards to Food (33) Kashrut refers to the laws that dictate which foods are fit for consumption by a Jew. According to Orthodox Jewish belief these laws were commanded by G-d to the Jewish people, through the giving of the Torah at Sinai. The basic skeleton was written in 2 chapters of the Torah, whilst the details and ramifications were orally transmitted through the ages, eventually written down by Rabbi Yehudah HaNasi in the Mishna, and expounded upon in the Talmud. In accordance with the directive found in the first verse of 'Ethics of our Fathers :' 'to make a fence around the Torah,' -various statutes were enacted over time be Rabbinic authorities in order to safeguard the biblical laws. Kashrut is a Chok, a mitzvah that by defintion has no comprehendable rationale that human beings can perceive. Over the years people have offered rational motivations for the laws of Kashrut, like health reasons. If a person claims that his performance of mitzvot is limited to having a rational motivation for them, his relationship with G-d (which is potentially infinite & created by his fulfillment of G-d's will,) is automatically limited to the size of his (finite) intellect. Indeed somebody who takes this stance, wallows in the shadows of the nations of the world, who according to a midrash, when offered the Torah, wanted to examine the mitzvot beforehand. ...read more.

(this fits in with the hebrew for permissable 'mutar' literally means 'unbound'- the spark is unbound from the physicality within which it is entrapped, and can be elevated) However if the food is of the category that G-d does not want us to partake of, no matter what we do to it we cannot make it holy, it can only take us down with it. Employment of the Rabbi Shneur Zalman of Liadi's approach to eating, sees the transformation of the physical food, into spiritual sustenance. This transformation of a useless, inanimate, independant entity into a tool for serving G-d, creates an elevation of physicality, that according to Rabbi Shneur Zalman of Liadi, was the whole purpose of creation, that the even physicality should be made holy. Thus the physical kosher food, becomes food for the soul, directly helping a Jew to grow spiritually (because he is doing what G-d wants him to do by eating kosher) and indirectly the food gives the body energy to serve G-d in other physical persuits, also boosting the soul. All in all kosher food, if eaten in the right manner acts as food for the soul, whereas no benefit can be gained from kosher food, it can only drag a person down with it. By eating kosher food a Jew refines the animal he is eating. Nachmandes makes the point that non-kosher animals generally reflect their spiritual negativity in their actual nature and behaviour. ...read more.

The theme of concern over what is ingested continues with regard to the prohibition against eating meat and milk together. The meat comes from a dead animal, whilst milk comes from a live animal... By separating meat and milk we are being asked to be aware of where the food we are eating comes from, how is it produced. Presumably this would lead to the ultimate source of everything, G-d. Kashrut creates an aspect of eating above simple instant gratification, something that requires thought. In a series of rabbinical ordinances instituted as a safeguard against intermarriage and assimilation, the rabbinic authorities forbade the consumption of the wine, bread and cooked foods of a non-Jew, even when these do not contain any non-kosher ingredients. On a social level, Jews shop at the same bakery, they have their own butcher. These rabbinic laws maintain Jewish unity, on the most mundane level, the laws of Kashrut contribute to the preservation of the Jewish nation and Jewish identity. Kashrut ensures that Jews are even to an extent united in body, which helps us appreciate the truth, that in regard to the soul of a Jew, all Jews are unite brothers, stemming from one source as explained in chapter 32, of the Tanya. Ultimately the laws of Kashrut teach that even with regard to the most mundane, animalistic natural past times of a human being, the Jewish people have to sanctify themselves. "And you shall be for me a kingdom of priests and a holy nation... (Deuteronomy 4:20)" Clive Freedman - 1 - ...read more.