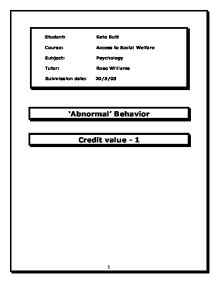 A topic was given to everyone in the class based on the subject 'Abnormal' Behavior. The aim was to present the findings of the subject to the class accompanied with a hand out.

Student: Kate Butt Course: Access to Social Welfare Subject: Psychology Tutor: Rose Williams Submission date: 20/3/03 'Abnormal' Behavior Credit value - 1 Preface A topic was given to everyone in the class based on the subject 'Abnormal' Behavior. The aim was to present the findings of the subject to the class accompanied with a hand out. Within this report will be a list of evidence surrounding the subject matter Anorexia Nervosa and an evaluation of the presentation. Contents Section Description Page Number 1 Signs and symptoms 4 2 Causes 5 3 Difficulties encountered 6 4 Professionals who help 7 5 Treatments 8 6.1 Explanations of condition 9 Through five main perspectives: 6.2 Biological 9 6.3 Psychodynamic 9 6.4 Behaviorist 10 6.5 Cognitive 10 6.6 Humanist 11 7 Evaluation 12 Signs and Symptoms 1. Signs and Symptoms. Eating Disorders are characterized by psychical and psychological harmful eating patterns; these patterns are categorized as 'Behavior Syndromes' associated with psychological disturbances and psychical factors. Anorexia Nervosa means nervous loss of appetite, there are many contributing factors however for the anorexic person it does not mean loss of interest in food, it is quite the opposite. Food is always on the brain for the anorexic, many dream of food, read cook books back to back and prepares meals for family and friends this does not mean these are the warning signs however it does give a background into the mind of an anorexic. ...read more.

Explanations through the five perspectives 6.2 Biological The biological approach to eating disorders looks at the genetic factors. Twins studies show evidence of eating disorders as being generic however it was not enough evidence to connect eating disorders as being genetic. 'A sample of 10,000-20,000 would be needed to discover the importance of genetic factors for eating disorders'. (Holland et al 1995) Evidence from the neurotransmitters and hormones indicate abnormalities from those suffering with the disorder however there is still not enough evidence to prove if the abnormalities caused anorexia or if it was due to the damage that was made from the disorder. The effects an eating disorder can be anxiety, increased levels of serotonin are also found in the body. Serotonin is made from 'trypophan' which is a form of amino acid. These chemicals are produced from food, the effects of reducing calorie intake. What it basically means is the body can discourage food intake. This is not the case there isn't enough evidence surrounding that anorexia can be genetic even though the body can discourage eating food is still needed to survive. 6.3 Psychodynamic The psychodynamic model looks at how adolescents fear adulthood for a female this can be entering puberty, sexual relationships and social factors. ...read more.

I enjoyed the both but one was on PowerPoint which I found easy to read the OHP's Sara-lee provided was not very clear this is not down to her fault but the nature of the machine can make it that way. Andrea's topic was on bipolar disorder which is a form of a manic depressive. This presentation was focused on the five perspectives to the disorder, I felt Andrea was confident and understood the topic however the handout was in detail of the disorder to the five perspectives and not enough emphasis on the subject and what it was. The finial presentation was on obsessive compulsive disorder (OCD) I enjoyed this presentation however I feel for three different resources the same information was provided. On the day of the presentation there was a good atmosphere. A variety of methods were used such as PowerPoint, OHP's, cue cards, video's, newspaper articles and poems; visual aids were also provided. As for my handout I feel I could have listed the disorder to the five perspectives but as it was only specified as a one page handout it was very limiting. My personal preference for presentation tool would have to be power point as there is a variety of backgrounds, sounds, images there is also a notes tool which I used to assist with my presentation. ...read more.