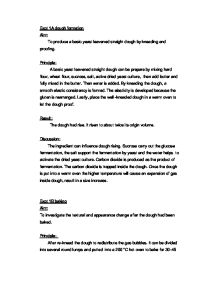 Aim: To produce a basic yeast leavened straight dough by kneading and proofing.

Expt 1A dough formation Aim: To produce a basic yeast leavened straight dough by kneading and proofing. Principle: A basic yeast leavened straight dough can be prepare by mixing hard flour, wheat flour, sucrose, salt, active dried yeast culture, then add butter and fully mixed in the butter. Then water is added. By kneading the dough, a smooth elastic consistency is formed. The elasticity is developed because the gluten is rearranged. Lastly, place the well-kneaded dough in a warm oven to let the dough proof. Result: The dough had rise. It risen to about twice its origin volume. Discussion: The ingredient can influence dough rising. Sucrose carry out the glucose fermentation, the salt support the fermentation by yeast and the water helps to activate the dried yeast culture. Carbon dioxide is produced as the product of fermentation. The carbon dioxide is trapped inside the dough. Once the dough is put into a warm oven the higher temperature will cause an expansion of gas inside dough, result in a size increase. ...read more.

So there are air bubbles in the interior of bread, making it spongy. The dough had expanded again during baking. It not only causes by expanded of carbon dioxide in dough. More important, it is due to the baking temperature is 200�C exceed the boiling point of water i.e. 100�C, so the water content in dough had changed from liquids to gaseous state(form steam). Gas occupy a large area than liquid causing the dough to rise again. Expt 2 Browning reaction Aim: To investigate the ingredients that is necessary for a browning reaction. Principle: By mixing solution according to following table. Tube 1 2 3 4 Glucose solution ml 0 4 0 4 Glycine solution ml 0 0 4 4 Water ml 8 4 4 0 And place the test tube in a 120 C hot oven for at least 1 hour. Observe whether browning of solution occurs. The component need in the browning reaction can be determine. As browning will not occur if anyone of these is missing. ...read more.