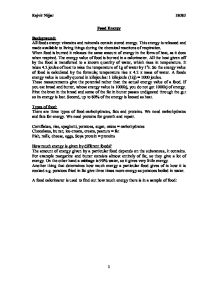 All foods except vitamins and minerals contain stored energy. This energy is released and made available to living things during the chemical reactions of respiration.

Food Energy Background: All foods except vitamins and minerals contain stored energy. This energy is released and made available to living things during the chemical reactions of respiration. When food is burned it releases the same amount of energy in the form of heat, as it does when respired. The energy value of food is burned in a calorimeter. All the heat given off by the food is transferred to a known quantity of water, which rises in temperature. It takes 4.2 joules of heat to raise the temperature of 1g of water by 1oc. So the energy value of food is calculated by the formula; temperature rise x 4.2 x mass of water. A foods energy value is usually quoted in kilojoules: 1 kilojoule (1kj) = 1000 joules. These measurements give the potential rather than the actual energy value of a food. If you eat bread and butter, whose energy value is 1000kj, you do not get 1000kj of energy. ...read more.

potatoes fried in fat give three times more energy as potatoes boiled in water. A food calorimeter is used to find out how much energy there is in a sample of food: Prediction I think that the more energy a food contains then the more hotter the water will be. The food containing more fats will increase the temperature the most because... More fats>more energy>rise in temperature Plan To investigate how much energy a food sample contains I will need... Bowling tube Tongs Water Crushed food - crisps, cereal, rice, biscuit, noodles, bread Bottle top Thermometer Bunsen burner Pestle and mortar For the whole of the experiment I shall be wearing goggles. Firstly I am going to fill a boiling tube with 1/3 of water and then I am going to clamp it (see diagram). Then I shall record the temperature of the water. Then I am going to crush the food that I shall be using with a pestle and mortar and then place the food in a bottle top. ...read more.

I am not surprised that the noodles contained the least amount of energy, as the noodles don't have much fat. Order of energy given out: Most Crisps Cereal Bread Biscuit Rice Least Noodle Evaluation I think that the experiment was unreliable. The results were not very accurate due to the not so accurate amount of water and the foods, we could of weighed and made sure that we used the same amount of food for each one. Also we should of left the water to cool down between each food for the same amount of time. Instead of using a 1/3 of the boiling tubes amount in water we could of used 20ml of water. There were also difficulties in keeping the Bunsen burner alight and also keeping the food alight long enough to have an effect in the temperature of the water. Also to ensure the Bunsen stays alight and isn't affected by wind, e.g. place a shield around the Bunsen. Rajvir Nijjar 18083 1 ...read more.