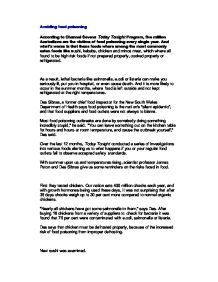 Avoiding food poisoning According to Channel Sevens Today Tonight Program, five million Australians are the victims of food poisoning every single year. And what's worse is that these foods where among the most commonly eaten foods like sushi, kebabs, chicken and mince meat, which where all found to be high risk foods if not prepared properly, cooked properly or refrigerated. As a result, lethal bacteria like salmonella, e.coli or listeria can make you seriously ill, put you in hospital, or even cause death. And it is more likely to occur in the summer months, where food is left outside and not kept refrigerated at the right temperatures. Des Sibraa, a former chief food inspector for the New South Wales Department of Health says food poisoning is the nation's "silent epidemic", and that food suppliers and food outlets were not always to blame. ...read more.

"Nearly all chickens have got some salmonella in them," says Des. After buying 16 chickens from a variety of suppliers to check for bacteria it was found that 75 per cent were contaminated with e.coli, salmonella or listeria. Des says that chicken must be defrosted properly, because of the increased risk of food poisoning from improper defrosting. Next sushi was examined. When the health department in Canberra tested 55 sushi samples from 14 separate outlets, they found contamination was widespread. A third of the samples recorded the bacteria e.coli and the potentially deadly listeria. 63 per cent of the rice samples were at the wrong temperature. How could you tell if the rice is off? "Well you don't know if its off that's the trouble - which is why cooked foods like rice should be kept under five degrees or over 60 degrees. ...read more.

About 10-15 minutes later after eating a kebab her stomach kept rolling over, she said. "I wasn't feeling 100 per cent and I know when something's not right." Kat was lucky not to end up in hospital but was in bed for a couple of days after that eating the kebab. Of all the foods tested, sushi it was believed was the one that had the greatest risk. Sushi is very dangerous for two reasons, one you have cooked rice and raw fish, and just raw fish along can contain parasites, they can be crawling around in there and you can be eating a live parasite. To avoid food poisoning this summer, the answer is to know and trust the outlet you're buying from, how clean and hygienic they are. And always remember that the cheapest supplier may not be the best. If the outlet is not thoroughly clean, then walk out and shop elsewhere. ...read more.