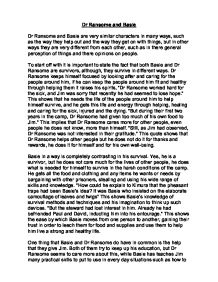 Basie and Dr Ransome in Empire of the sun

Dr Ransome and Basie Dr Ransome and Basie are very similar characters in many ways, such as the way they help out and the way they get on with things, but in other ways they are very different from each other, such as in there general perception of things and there opinions on people. To start off with it is important to state the fact that both Basie and Dr Ransome are survivors, although, they survive in different ways. Dr Ransome keeps himself focused by looking after and caring for the people around him, if he can keep the people around him fit and healthy through helping them it raises his spirits, "Dr Ransome worked hard for the sick, and Jim was sorry that recently he had seemed to lose hope." ...read more.

This quote shows that Dr Ransome helps other people but he does not do it for thanks and rewards, he does it for himself and for his own well-being. Basie in a way is completely contrasting in his survival. Yes, he is a survivor, but he does not care much for the lives of other people, he does what is needed for himself to survive in the harsh conditions of the camp. He gets all the food and clothing and any items he wants or needs by bargaining with other prisoners, stealing and using his wide range of skills and knowledge. "How could he explain to Kimura that the pheasant traps had been Basie's idea? It was Basie who insisted on the elaborate camouflage of leaves and twigs" This shows Basie's knowledge of survival methods and techniques and his imagination to think up such devices. ...read more.

Both of them try to keep up his education, but Dr Ransome seems to care more about this, while Basie has teaches Jim many practical skills to put to use in every day situations such as how to steal extra food and ingratiate himself with important people to gain higher respect. Dr Ransome looks after Jim physically "Eat the weevils Dr Ransome had told him, and he did so, although everyone else washed them away. But there was protein in them." This shows that he is trying to give Jim as much nutrition as possible and teach him about surviving off the rations. He also educates Jim "But Dr Ransome still set Jim a wide range of tasks. There were poems to memorize, simultaneous equations to be solved, general science...and French which he loathed." This shows that Dr Ransome cares for Jim and is trying to keep his young mind alive by giving him work to do. ...read more.