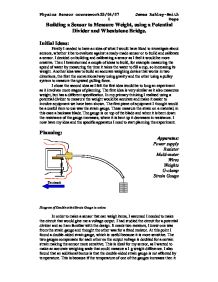 Building a Sensor to Measure Weight, using a Potential Divider and Wheatstone Bridge.

Building a Sensor to Measure Weight, using a Potential Divider and Wheatstone Bridge. Initial Ideas: Firstly I needed to have an idea of what I would have liked to investigate about sensors, whether it be to evaluate against a ready-made sensor or to build and calibrate a sensor. I decided on building and calibrating a sensor as I feel it would be more creative. Then I brainstormed a couple of ideas to build, for example measuring the speed of water by measuring the time it takes the water to fill a cup, so increasing its weight. Another idea was to build an accurate weighing device that works in two directions, the first the conventional way using gravity and the other using a pulley system to measure the upward pulling force. I chose the second idea as I felt the first idea would be to long an experiment as it involves more stages of planning. The first idea is very similar as it also measures weight, but has a different specification. In my primary thinking I realised using a potential divider to measure the weight would be accurate and make it easier to involve equipment we have been shown. The first piece of equipment I thought would be a useful item to use was the strain gauge. These measure the strain on a material, in this case a hacksaw blade. The gauge is on top of the blade and when it is bent down the resistance of the gauge increases, where it is bent up it decreases in resistance. I now have my idea and the specific apparatus I need to start planning the experiment. ...read more.

With the Wheatstone bridge the resistance of the variable resistor will need to increase to counter the increase from the gauge. I predict another influencing factor will be that as the weight increases the difference in resistance change will be smaller. I predict this because I found from the previous experiment that, initially the weights bend the blade and the gauges. Then as the blade becomes more vertical due to considerable weight on the blade, the force from the weights will start to pull the gauges longitudinally and not bend them as much each time an extra weight is added. This means the force bending the blade has been increasing through the experiment, but will not have done so with a regular series between the readings. This is due to the total force being divided into two individual acting forces, one the force bending the blade and the other the force pulling the blade and the gauges. Over all as the masses increase the difference in resistance will be smaller. The effect of this will be that the resolution will be small and so more useful for the sensor, but then for larger masses the resolution will increase as the difference in resistance will be smaller. This would mean the graph, which plots resistance of the variable resistor against the weight will begin low as there will be no load on the blade so no extra resistance, then as more weights are added the resistance will increase as the blade is bent more. I know that the larger the weight the smaller the resistance increase between the readings, this will be shown on the graph by a curve that tends to a line that is parallel to the x-axis. ...read more.

This means that in the future I will need to use the same strain gauge in the sensor to measure the weight of items, so the resistance values are the same for a certain weight. If you look at the graph to the left you can see that it shows the resistance increase between each reading. It starts high because the sensor is more sensitive with lower weights. However as we proceed along the x-axis the average resistance increase does decrease, but in reality the line is not smooth. This could be because of the mild steel the blade was made out of, it might not have bent a uniform distance for one reading, but then for the next reading the blade might have given more and so bent more than the uniform distance. This would explain the little peaks to the graph. This effect might also have been caused by the way the gauge was mounted on the blade. To diminish these results I would have to take repeats and then average them. In conclusion I have explained all the areas I feel that needed to be explored so I am in a good position to create a better sensor that works according to its aims. In the future in order to make the best sensor, areas such as the material the blade was made out of and different types of gauges should be investigated. I think the gauges I was using were silicon crystal gauges and the blade was mild steel. The effects from these experiments would determine what materials are best for a sensor that measures weight. If I were to redo this experiment I would have taken more repeats. Reference: Advancing Physics AS (Jon Ogborn and Mary Whitehouse) CD-ROM for Advancing Physics Teacher advice Physics Sensor coursework 25/04/07 James Ashley-Smith 1 Deps ...read more.