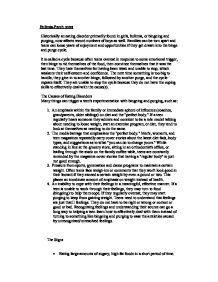 Bulimia-Psych notes Historically an eating disorder primarily found in girls, bulimia, or bingeing and purging, now affects record numbers of boys as well. Families can be torn apart and teens can loose years of enjoyment and opportunities if they get drawn into the binge and purge cycle. It is called a cycle because often teens overeat in response to some emotional trigger, then binge to rid themselves of the food, then convince themselves that it was the last time. They hate themselves for having been weak and unable to stop, which weakens their self-esteem and confidence. The next time something is too big to handle, they give in to another binge, followed by another purge, and the cycle repeats itself. ...read more.

While standing in line at the grocery store, sitting in an orthodontist's office, or leafing through the stack on the family coffee table, teens are constantly reminded by the magazine cover stories that having a "regular body" is just not good enough. 3. Pressure from sports, gymnastics and dance programs to maintain a certain weight. Often teens face weigh-ins or comments that they won't look good in their leotard if they exceed a certain weight by even a pound or two. This places an inordinate amount of emphasis on weight instead of health. 4. An inability to cope with their feelings in a meaningful, effective manner. If a teen is unable to work through their feelings, they may turn to food (bingeing) ...read more.

* Flushing the toilet more than once while in the bathroom (many toilets do not have a sufficient "flush" and it takes 2 to 3 flushes to get rid of all of that has been thrown up). * Getting on and off the scale several times a day or obsessing about weight. * Mood swings. * Telling "white lies." * Having to go somewhere or run an errand unexpectedly. * Eating large quantities of food after experiencing stress or painful feelings, or in celebration of a success. * Not having money when he or she had it before. * Exercising compulsively. * Finding a vomit smell, the window open, the fan on, or an excessive amount of air freshener or perfume in the bathroom after he or she has spent an unusual amount of time in there. ...read more.