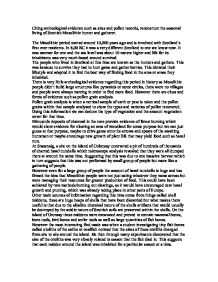 Citing archeological evidence such as sites and pollen records, reconstruct the seasonal living of Scottish Mesolithic hunter and gatherer.

Citing archeological evidence such as sites and pollen records, reconstruct the seasonal living of Scottish Mesolithic hunter and gatherer. The Mesolithic period started around 10,000 years ago and is involved with Scotland's first ever residents. In 8,00 BC it was a very different Scotland to one we know now. It was warmer for one and the sea level was about 10 meters higher and life for its inhabitants was very much based around survival. The people who lived in Scotland at this time are known as the hunters and gathers. This was because to survive they had to hunt game and gather berries. This dictated their lifestyle and adapted it to find the best way of finding food in the area or areas they inhabited. There is very little archeological evidence regarding this period in history as Mesolithic people didn't build large structures like pyramids or stone circles, there were no villages and people were always moving in order to find more food. ...read more.

Other main sources of information regarding this time come from things called shell middens, these are huge heaps of shells that have been discarded but what makes them useful is that due to the alkaline chemical nature of the shells artifacts that would usually be destroyed by the acidic nature of Scottish soils are preserved within the shells. On the island of Oronsay these middens were excavated and proved to contain mammal bones, bone tools, bird bones and antler tools as well as large quantities of fish bones. However the most interesting find made was when a student investigating tiny fish bones called otoliths of the saithe or coalfish noticed that the sizes of these otoliths changed from site to site around the island. He then through many experiments discovered that the size of the otoliths was very closely related to season that the fish died in. This suggests that each midden around the island was inhabited for a particular season at a time. ...read more.

There was evidence of this plant found at near by site of Stoasnaig on Colonsay, where the huge hoard of chestnuts were found so it is reasonable to assume that these too would have made up their diet combined with seal, coal fish otter and even whale. The sort of structures that these people used to live in would have been hut structures like Navajo Hogan huts. These huts were constructed three or more linking poles this again can be seen at stoasnaig were a pole may have been set at a angle in the gully to form a Y configuration with a forked upright post located off center in the hollow packed by stones and would have had a central hearth. At Cnoc Coig a circular arrangement of stake holes was discovered measuring 3.0 - 3.5m in diameter and with a 'very thick and heavily burned hearth' (Mellars, P. 1979, 50) at the center. Evidence was found for many fires being lit and other hearths were also discovered, the rising mound of the midden would also have given the occupants of the camp some protection. ...read more.